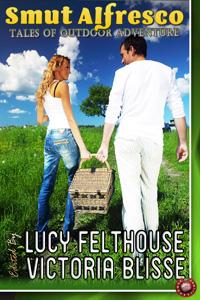 From the dramatic gritstone escarpments of Derbyshire’s Peak District, to a quiet caravan site in deepest Wales, Smut Alfresco has it all. Whatever your interpretation of frisky outdoor fun, there’s something nestling between the covers for you.
Sexy woodsmen, daring couples, rock stars, cougars, map enthusiasts, mattresses, ex-lovers, tour guides, hunky sheriffs and nature reserve rangers all appear in this hot collection of stories from erotica’s finest authors.
Includes stories from: Violet Fields, Demelza Hart, Victoria Blisse, Jacqueline Brocker, Wendi Zwaduk, K T Red, Tilly Hunter, Bel Anderson, Lucy Felthouse, Kay Jaybee, Tenille Brown, Cass Peterson, Jenny Lyn and Nicole Gestalt.
Available from:
aRe
Amazon.com
Other links added here as they become available:
http://lucyfelthouse.co.uk/published-works/smut-alfresco/
*****
Being Free
By Lucy Felthouse
Violet slammed down the lid of her laptop with far more force than was necessary. She flinched, thinking perhaps she might have cracked the screen or broken one of the machine’s internal components. Then she shrugged, realising she didn’t care if she had. It was her work’s computer, after all, not hers. If it was fucked, they’d have to replace it. And it would serve them right, too. Bastards.
The reason she was pissed off was the fact she was in work at all. It was Saturday, and the previous afternoon her useless boss had dumped a project on her, stating it had to be finished by Monday, no matter how long it took. He’d then added that he was going away for the weekend, meaning it was all down to her. The selfish, disorganised wanker. It wouldn’t be so bad, but she hadn’t had a pay rise for two years, and when she went above and beyond for her job, she didn’t get so much as a thank you, let alone be paid any overtime. It wasn’t the first time something like this had happened, either.
Well, fuck them. She wasn’t going to be a doormat—or her boss’ scapegoat—anymore. Let them try and sack her—she wasn’t doing anything remotely wrong, and they couldn’t make her working life any more hellish than it already was.
She stood up sharply, sending her swivel chair careening backwards across the room until it hit the wall. She shrugged again, she still didn’t care. Let it chip the fucking paintwork, or a bust a hole in the plasterboard. No one else was there, so nobody could prove or disprove that it had been an accident.
Pausing to switch the lights off—she was pissed off at her employers, not the environment—she left the offices, setting the alarm before closing the door behind her. Stuffing her access swipe card into her handbag, she heaved a sigh of relief. There would probably be hell to pay for her stunt on Monday, but she’d worry about that then. Right now, she was just desperate to get out. Into the countryside, or, given she was in central London, to a green space, at the very least.
From where she worked, Green Park was probably the closest, but she figured Hyde Park and Kensington Gardens were bigger, so she’d be more likely to find a secluded spot where she could just be by herself. The last thing she needed now was to have to deal with other people.
*****
Links:
http://lucyfelthouse.co.uk and http://victoriablisse.co.uk