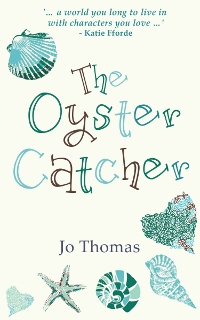 What writing goals have you set for yourself in 2014?
In 2014 I hope to finish writing my new book, all set at a music festival and inspired by street food and food memories. And then I have a Christmas story that’s nagging at me to be written.

What inspired the writing of The Oyster Catcher?
My husband was offered a job on the west coast of Ireland, in Galway, to work on an Irish-language soap opera there. We went over to see the place to decide if we would go as a family. From the moment we arrived it poured with rain. I’ve never known rain like it, and that’s after living in Wales. You couldn’t see your hand in front of your face. I decided that it wasn’t going to work, until that night when we went to a restaurant; a wonderful place called O’Grady’s. It’s an end cottage in a row of terraced cottages, painted light blue. You walk in and the fire is going, the candles are lit, and you look out over sea. And there I ate pacific oysters. I looked out of the cottage window and thought, OK, I get it. If this is what Galway has to offer, I’m in. And from then on I had some of the most amazing meals I’ve ever had, from wild foraged food, saffron sorbet , and the oysters, just wonderful. I thought, ‘this is sexy’. But it’s such a precarious business.  And an idea began to form.

What seafood delicatessen is your favorite?
Lobster! Plain and simply done. Boiled and served with hot garlic butter and mayonnaise with homemade chips. Or oysters served with red wine vinegar and shallots. Just fabulous.

Excerpt from The Oyster Catcher

The sea air hits me like mouthwash for the head. It’s clean, fresh, and smells of salt. I’m standing on the steps of the Garda station; or Portakabin really. The wind blows my hair and I hold my face up to it, letting any tears that may have escaped mingle with the damp air. With my eyes shut and my face held up to the wind I realise two things. One, I’m in a place called Dooleybridge and two; I am absolutely stranded wearing the only dress I have – the one I’d got married in.

I open my eyes, shiver and walk back towards the harbour wall where the camper van had been. There are some scuff marks on the wall and a headlight that had fallen off, but other than that there’s no real trace that it was ever there at all. I bend down and pick up the light. Oh, that’s the other thing I realised while being cautioned. There’s absolutely no way I can go home, no way at all.

I turn round and walk back towards the road; when I say walk, it’s more a hobble. My shoes are killing me and are splashing water up the back of my feet and calves. But then it isn’t really gold mule weather. It’s cold and wet and I couldn’t feel any more miserable than I already do. I head back up the hill and cross the road just below the Garda station and step down into a tiled doorway. I take a deep breath that hurts my chest and makes me cough. I have no other choice. I put my head down. I touch the cold brass panel on the door and with all the determination I can muster, push it open.

The door crashes against the wall as I fall in, making me and everyone else jump. As I land I realise it’s not so much the throng I was expecting but a handful of people. All eyes are on me. A hot rash travels up my chest and into my cheeks making them burn and inside I cringe. I feel like I’ve walked on to the set of a spaghetti western and the piano player has stopped playing. ‘Sorry,’ I mouth and shut the door very gently behind me. My stomach’s churning like a washing machine on spin cycle. I look round the open-plan pub. At one end is a small fireplace and despite it supposedly being summer there’s a fire in the grate giving out a brave, cheery, orange glow against the chilly atmosphere. There’s an unfamiliar smell in the air, earthy yet sweet. In the grate there are lumps of what look like earth burning on the fire. Back home I’d just flick on the central heating but home is a very long way away right now. There’s wood panelling all across the front of the bar, above it, below it and round the walls. When I say wood panelling, it’s tongue and groove pine that’s been stained dark. It’s the sort of place you’d expect to be full of cigarette smoke but isn’t. In the corner by the fire there’s a small group of people, all of them as old as Betty from Betty’s Buns. Or as it’s now known The Coffee House. Betty’s my employer, or should that be ex-employer?

Betty refuses to take retirement and sits on a stall at the end of the counter, looking like Buddha. She’s never been able to give up the reins on the till. She did once ask me to take over as manager but I turned it down. I’m not one for the limelight. I’m happy back in the kitchen. Kimberly, who works the counter, tried for the job but Sandra from TGI Friday’s got it and Kimberly took up jogging and eating fruit. The group by the fire is still staring at me, just like Betty keeping her beady eye on her till.

There are two drinkers at the bar, one in an old tweed cap and jacket with holes in the elbows, the other in a thin zip-up shell suit and a baseball cap. They’ve turned to stare at me too. With burning cheeks and the rash still creeping up my chest, I take a step forward and then another. It feels like a game of grandmother’s footsteps as their eyes follow me too. The barmaid’s wiping glasses and smiles at me. I feel ridiculously grateful to see a friendly face. It’s not her short dyed white hair that makes her stand out or the large white daisy tucked behind one ear. It’s the fact she’s probably in her early twenties I’d say, not like any of her customers.

A couple of dogs come barking at me from behind the bar. I step back. One is black with stubby legs, a long body and a white stripe down its front. The other is fat and looks a bit like a husky crossed with a pot-bellied pig.

I’m not what you’d call brave really. I’ve always thought it was better to try and skirt conflict rather than face it head on. I look for someone or something to hide behind but the barmaid steps in.

‘Hey, settle down,’ she snaps. She might be small but she’s got a mighty bark. Unsurprisingly the dogs return behind the bar, tails between their legs. I think I’d’ve done the same if she told me to.

‘Now then, what can I get you?’ she wipes her hands on a tea towel and smiles again.

‘Um …’ I go to speak but nothing comes out. I clear my dry throat and try again.

‘I’m looking for …’ I look down at the piece of paper in my hand, the back of a parking ticket. ‘Sean Thornton?’ I look back at the barmaid.

Blurb for The Oyster Catcher by Jo Thomas

According to a champion shell shucker, in order to open an oyster you first have to understand what’s keeping it closed.

When runaway bride Fiona Clutterbuck crashes the honeymoon camper van, she doesn’t know what to do or where to go.

Embarrassed and humiliated Fiona knows one thing for sure, she can’t go home. Being thrown a life line, a job on an oyster farm seems to be the answer to her prayers.  But nothing could prepare her for the choppy ride ahead or her new boss the wild and unpredictable Sean Thornton.

Will Fiona ever be able to come out of her shell?

As the oyster season approaches, will there be love amongst the oyster beds of Galway bay? Or will the circling sharks finally close in?

Bio:
Jo Thomas started her broadcasting career as a reporter and co-presenter with Rob Brydon on BBC Radio 5, reported for BBC Radio 4’s Woman’s Hour and went on to produce at BBC Radio 2 working on The Steve Wright Show.  She now lives in the Vale of Glamorgan with her writer and producer husband, three children, three cats and a black lab Murray.  She writes light hearted romances about food, family, friendships and love; and believes every story should have a happy ending.