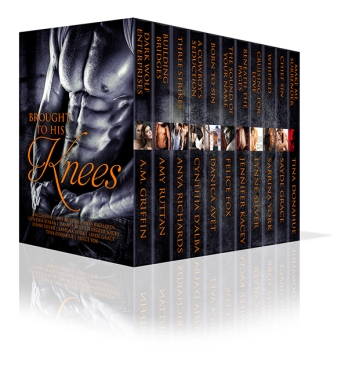 Brought to His Knees

The Alpha male. Strong. In control. Letting no one and nothing rule him…until he meets the one, and all bets are off. The world tilts, the bed rocks, and suddenly that tough guy finds himself Brought to His Knees—in more ways than one.

Beneath the Pages ~ Jennifer Kacey

One wicked night with her did nothing but whet his appetite. Now he’ll settle for nothing less than her complete submission.

Acacia owns and runs Fame, one of the hottest celebrity magazines in the country. She survives on convincing the rich and famous to reveal things they would normally do anything to keep hidden. She lives, eats and breathes the magazine. Day in and day out. She has no life, nothing to keep in the dark. Nothing but the night she gave herself over to the one man she never should have wanted.

Radigan, the most sought after actor in Hollywood, wants her again, and won’t take no for an answer. He had her for one night. Several hours of the best sex of his entire life, but she was gone the next morning before the sun had fully risen. His attempts to contact her have gone unanswered. Everything he’s tried so far has been a miserable failure. But he finally knows what to do to slip beneath the pages of her heart.

This time he’s playing for keeps and the exclusive rights to her body, heart and soul.

Jennifer Kacey is a wife, mother, and business owner living with her family in Texas. She sings in the shower, plays piano in her dreams, and has to have a different color of nail polish every week. The best advice she’s ever been given? Find the real you and never settle for anything less.

Whipped ~ Sabrina York – NY Times and USA Today Best Selling Author
A scalding attraction. An irresistible passion. A pity she’s the one woman he can never have…

Make Me Surrender ~ Tina Donahue
When it comes to two of the hottest guys in town, she has a proposition…to win their attention, passion, hearts.

A Cowboy’s Seduction ~ Cynthia D’Alba
One exhausted cowboy + One uptight account x A tropical resort = A hot seduction. But who is seducing whom?

Dark Wolf Enterprises ~ A.M. Griffin
Murder, mayhem and imprinting with a hot wolf shifter… And they say being an accountant is boring.

Building Bridges ~ Amy Ruttan
A vet tech and a lone wolf rancher ride out a sudden storm, but can they weather the emotions they stir up in each other…

Three Strikes ~ Anya Richards
Two lonely men. One secret affair. Irresistible passion that will push them both to the breaking point, and beyond.

Born to Sin ~ Danica Avet
A tomboy in love makes a desperate attempt to seduce her best friend and succeeds beyond her wildest dreams. But this Alpha male isn’t easily tamed and has secrets that could very well tear them apart.

Chief Sin ~ Sayde Grace
A taste of Sin isn’t enough. Instead she wants all of him, including the heart she once broke.