Girl To The Rescue.

I love a girl who can kick ass and stand up for herself. It has probably got to do something to do with trying hard to make my own decisions and step out from everyone’s expectations.

A sassy heroine who is independent, courageous and sexy grabs my attention every time. Misty is no different – she is the one who rushes to the rescue, not once but twice. But then when you’re a shifter who catches an unusual scent in the air a moonlit night, you have to go and find out where it leads. In Misty’s case it leads to Sofya and the chemistry between these two lead them to seek each other out for some night-time action of the intimate kind! 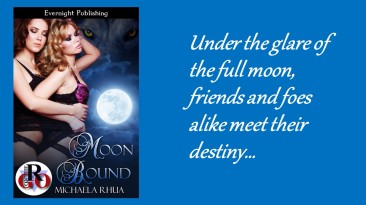 Blurb:
Under the glare of the full moon, friends and foes alike meet their destiny…

Wolf shifter Misty never thought she would rescue a damsel in distress, but when she stumbles across a bloodied girl on her run, she has to act fast. An action she ought to regret when that girl turns out to be Were shifter, and thus an enemy of her pack.

Feelings cannot be denied, however, and when she meets Sofya again, the girls give into their attraction for each other.

The path to true love is never smooth and tensions rise further when Sofya’s father is implicated in a shifter death.

Will this news tear the two lovers apart, and turn them into foes or can the moon bind them together to work out the truth?

“What’s up? You okay?” Misty was confused about why she had suddenly stopped.

“This is weird. I feel connected to you like I want…” Sofya lurched forward, grabbed Misty’s face, and kissed her with such fierce passion that Misty was knocked back to the ground. Sofya’s lips were locked against hers in a way that spoke of possession. Misty was momentarily shocked into a frozen state. She was not usually the submissive one when it came to sex. However, this time, she was happy to go with the flow. Then her mind woke up and she gave her herself a kick in the butt. Get with the program. Misty pulled at Sofya’s thin clothing to get her as naked as she was. Sofya obliged by moving away so Misty could take her vest top off. Underneath were two heavy breasts and curves galore that made Misty’s mouth water. Dotted around Sofya’s body were fading bite marks. Misty gently kissed each one to take away the hurt they had caused. Then she pulled Sofya forward to suck each erect nipple and squeeze and massage those wonderful globes of flesh. Sofya moaned every time Misty sucked her delicious nipples and those little sounds of pleasure made Misty’s pussy tingle.

Sofya grabbed Misty’s hair, pulled her head back and kissed her with animal passion. A low growl came from Misty, who immediately pushed down Sofya’s joggers and grabbed her rounded ass.

“I can’t explain this. All I know is that I have to have you right now, right here.” Sofya’s words caused Misty’s pussy to throb with need. She couldn’t believe how she longed to taste Sofya’s clit. Sofya was hot as hell and Misty knew deep down she had wanted her badly, even when she was recovering in hospital.

Sofya licked and bit Misty’s nipples to the point of delightful pain. Misty wove her fingers through Sofya’s hair, enjoying the feeling of being pinned down under this luscious beauty. Sofya kissed down Misty’s stomach to her pubic mound and stroked the thin line of hair that went to Misty’s pussy. Gradually Sofya moved her fingers and went lower and lower, teasing Misty’s nether lips open.

“You smell like honey. I wonder if you taste like honey too.” Sofya didn’t wait for a response before she moved down to lick around Misty’s clit, then up and down faster and faster.

Misty spread her legs and rocked her hips to match the pace of Sofya’s tongue.

“Damn you’re good, Sofya. I order you not to stop,” Misty said through heavy breaths.

Misty’s brain was set to explode as soon as Sofya sucked on her clit whilst two fingers slid into her wetness. Colors danced before Misty’s eyes as Sofya pushed in and out of her. Sofya licked circles around Misty’s clit, then covered her clit with her hot, wet mouth and let her tongue have full reign. Misty was lost and she wasn’t bothered about being found ever again. Her body felt like it was on fire and her heart seemed to be beating out of her chest. When Sofya’s teeth grazed her clit, Misty’s orgasm exploded and her beast screamed into the night.

Released on 5th February at www.evernightpublishing.com and other eBook Stores too.

Hope you like the sound of the book. Why not check out book 1- Moon Dance – available here:

Michaela Rhua always dreamed of writing but this never happened until she met the lovely group of ladies known as UCW. Their passion for writing and encouragement inspired her to see if she could do it too. Now she is multi published and loves writing!

She has teenage children who also keep her busy. However, it is whilst travelling into work that she has time to create her characters and imagine other places in which they exist as her world skims by the window. Conversations overheard often lead to the birth of new ideas that she scribbles down in her trusty notebook.