Excerpt:
Heart pounding and palms clammy, Catriona forced herself to put one foot in front of the other and walked into the bookshop. It was bedlam. She’d never seen a bookshop so busy in her life.

She paused just inside the door. What the fuck was she doing? If someone saw her, recognised her—

She shook her head sharply and clenched her fists until her fingernails dug into her flesh, the nipping pain bringing her back to her senses.

Taking a deep breath and attempting to behave like a normal person, she continued through the shop, trying to figure out where she needed to be. Not that she even needed to be here at all. It was insanity that had drawn her out of her Thames-side apartment and into the bowels of the Tube, and finally into the huge Piccadilly bookstore.

What else but insanity would make a person head into central London to buy a copy of a book on the same day it came out? Especially when one already had a large box of copies of said book stuffed into the bottom of one’s wardrobe. Complimentary author copies, according to the note from the publisher.

Maybe it was curiosity, she thought, as she joined the back of the queue snaking across the ground floor of the shop. Nobody nearby was holding a copy of the book yet, so she assumed that somewhere between here and the till there was a stack of the paperbacks, ready to be picked up and paid for. And presumably read. Christ.

Surreptitiously, Catriona pinched the back of her hand. Wincing, she figured she had to get her head around this situation, and fast. It was only going to get bigger and crazier—or so the publisher’s marketing team, a bunch of young, attractive and scarily glamorous people, had told her.

She’d already seen plenty of evidence of their expenditure on the way over—billboards, bus shelters, ads on the Underground; all displaying huge versions of her book cover, proclaiming it a bestseller, quoting stellar reviews and even lauding it “the next big thing” and “the next Fifty Shades of Grey.” One strap line even said “Who needs Christian Grey when you’ve got Eliza Dickinson?”

It was the fact that her book had even been compared to the first big thing that she couldn’t quite grasp.

Catriona certainly hadn’t set out to write a book to appeal to the same readership. All she’d done was take out her real life frustrations—both sexual and otherwise—on the keyboard of her laptop. The rest had simply been a freak of nature.

It didn’t matter. None of it mattered. Her book was out, today, and what happened next was completely out of her hands. She should just relax and go with the flow. Though she still couldn’t get over the fact that people were not only buying her book—they were queuing to buy it. Patiently, too, despite the glacial speed at which they were moving forward. Did they only have one till open, or something?

People had joined the line behind her as she’d been ruminating, and she shuffled around slightly so she could see how many more were waiting. Shit—there were loads! She couldn’t even see the end of the queue.

Her surprise must have shown on her face, because the man behind her let out a chuckle. “It’s crazy, isn’t it?” he said. “All these people waiting to buy a book when we could have purchased online—probably cheaper—and had it delivered directly to our doors. Or in a single click, have it appear on our eReaders.”

Catriona hadn’t even thought of that. So, not only were people here, in the bookstore—and presumably stores all over the country, too—they were buying online, loading up eReaders… all for her little book!

About The Brit Babes:

The Brit Babes are eight British erotica writers coming together to bring you the hottest romance to satisfy your cravings. So go on, indulge yourself and explore your kinky side! 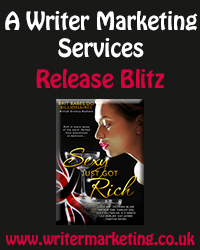