Hello everyone! Thank you for joining me for the 125th week of My Sexy Saturday.

Here are the details: every Saturday, published and unpublished authors will be sharing 7 words, sentences, or paragraphs from a work-in-progress or an already published story.

This week’s theme  — My Sexy Shifter

Since I currently have only one shifter in my list of titles, I’m sharing from FIGHTING FOR HONOR. I loved writing this story and can’t wait to return to Okanogan Valley soon!

(c) Kacey Hammell, 2016
Dominic closed the front door of his old cabin quietly behind him. The urge to run crowded him, tormenting him to let loose and give into the call of the wildness of being home. He needed some time to himself before he met up with his contact in an hour.

He was confident in the fact that he could bring down his cousin and those on his side and repair the damage to the pride before anything further was lost. 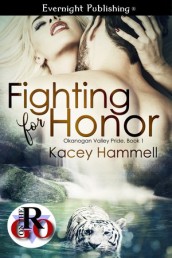 Shedding his sweats and t-shirt, he slipped out of his sandals and let the change overtake him. His muscles stretched and elongated, pulling his flesh taut and realigning his physique. On all fours, he lifted his nose to the air and darted his eyes across his surroundings. He’d always been grateful for his Panther ancestry. His vision alone was something he coveted. With silver eyes, he had the ability to see through the darkness in the dead of night, as if he held a lantern. His father told him many times that having that unique color was something only the most powerful of panthers possessed.

Taking off at a run, he re-familiarized himself with his favorite trail leading to the waterfall where he’d spent much of his childhood. The serenity and secluded area had always called to him, drawing him in and giving him the best place possible to contemplate his future.

If there was any one place in the valley he’d missed the most, it was the falls, and the memories there.

Darting faster and harder, his paws barely touching the ground, he pushed away the memories. He’d missed so much over the last five years. And she was at the top of his list.