ALIEN NEXT DOOR: The Complete Series

A collection of Alien Romance stories 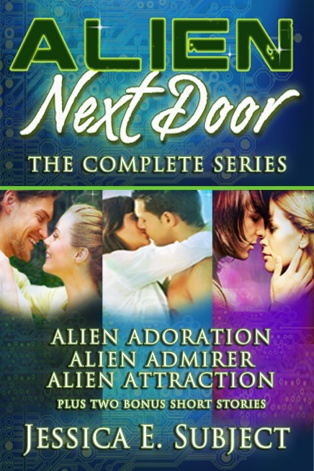 Is your sexy neighbor an alien? Enjoy three sci-fi romances from Jessica E. Subject in which the heroines discover the sexy man next door is not at all who they expect him to be.

Alien Admirer ~ He fills her with forbidden longing. But when Sera learns the truth, will Sera give Adam a chance, or will he be left in the cold, never more than her alien admirer?

Alien Attraction ~ She wants to be more alien. He wants to be more human. Born a galaxy apart, will Angela and Chal have a chance at love, or will their extraterrestrial secrets leave them running to stay alive?

What is it going to take to convince her I want her? On the ride home, he’d persuaded himself to give up on Sera. Until he’d seen her on the porch. He had to seize what might be his lone opportunity.

“Why do you have such a problem accepting that I’m attracted to you?”

It was all the invitation he needed. Closing the space between them, he held her, pressing his lips to hers. Sera moaned, her body tight against his. She didn’t push him away, instead wrapping her arms around him, running her foot up and down the back of his calf.

He clutched her thighs, pulling her up to straddle his waist. Every moan encouraged him to keep going. He wanted more.

“Inside,” she said in a breathless whisper. “Take me into the house.”

All right! Grasping and fumbling with the handle, he managed to open the door without letting her go. Focused on her in his arms, he shuffled around blindly until his knees met her couch. He laid Sera on the cushion, but she clung to him.

“No, my bedroom. And be sure to close the door.”

Her room? Holy shit! Before that moment, he’d expected several days of trying to win her over before she invited him to her room, if she ever even acknowledged his feelings.

He carried her up the butcher block wood steps, to the bedroom he’d helped build. While he’d helped build every part of the house, the master bedroom remained the one room he hadn’t entered since Sera moved in.

Alien Adoration:
“It is a sweet love story with a lot of storyline and some kinky sex thrown in.” ~ Monica Cullip

Alien Admirer:
“I enjoyed this story a lot. Enough that I went to Amazon and bought the first book in the series.” ~ Sci-Fi Romance Quarterly review by Marlene Harris

Bio:
Jessica E. Subject is the author of science fiction romance, mostly alien romances, ranging from sweet to super hot. Sometimes she dabbles in paranormal and contemporary as well, bringing to life a wide variety of characters. In her stories, you could not only meet a sexy alien or two, but also clones and androids. You may be transported to a dystopian world where rebels are fighting to live and love, or to another planet for a romantic rendezvous.

Jessica lives in Ontario, Canada with her husband and two energetic children. And she loves to hear from her readers. You can find her at jessicasubject.com and on twitter @jsubject.