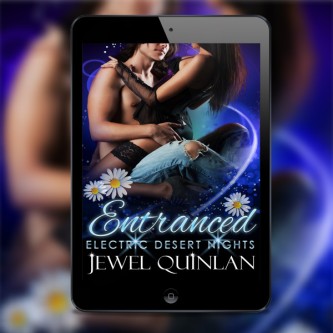 When vampire, Wade, is told by a psychic that he’s going to meet his soulmate at Electric Daisy Carnival in Las Vegas, he thinks it’s a load of crap. It’s where paranormal beings go every year to feed on human partygoers. But Wade’s curiosity won’t stop plaguing him while he’s there with his friends. When a near fatal accident thrusts him together with beautiful Yesenia, a human, both their eyes are opened to the mystical connection between them.

Mya goes to Electric Daisy Carnival with her friends hoping not only to have the time of her life but also to take her mind of off her problems. A gnawing hunger has plagued her for months. But even though she eats, she’s growing dangerously thin, and the doctors can’t figure out what’s wrong with her. While at the carnival, she runs into Somer who tells her he’s an incubus and that she’s paranormal as well. Mya doesn’t believe him, of course. But then when he kisses her, she feels an enticing heat curl deep within her and something else that makes her change her mind. Could Somer hold the key to making her well?

It’s the last night of Electric Daisy Carnival. And, rather than being excited, Tyler is less than thrilled. His two best girlfriends met guys they were interested in the previous nights of the carnival and arranged for everyone to hang out together, which means Tyler will be stuck with the third member of their group, a girl named Scarlett. At first he’s attracted to her sweet nature and girl-next-door good looks. But when she touches him, his mind is filled with thoughts and memories that aren’t his own, unsettling him. He’d rather not know more about her and how she’s making these things happen, but Scarlett seems to want the opposite.

Enjoy this excerpt from Book 1: ENTRANCED:

“Hey, Scarlett, you want to know why Wade’s scrutinizing every chick that passes?”

Scarlett perked up. “Why?”

Wade frowned at the incubus’s teasing tone. “What? I’m hungry.”

An amused smile spread across Somer’s handsome face. “Wade’s soulmate is supposed to be here tonight. Come on, Wade. You don’t really believe what that hag in Miami said, do you?”

“What hag?” Scarlett looked back and forth at the two of them.

Wade stuck his hands in his jean pockets and kicked at some litter on the ground. “No.”

It had been a mistake to pop into the psychic’s shop while he’d been with Somer at Ultra Music Festival in Miami. But, at the time, he’d been a little drunk and high himself because he’d fed on the blood of several people who’d been under the influence. Getting his fortune read had seemed like a bit of random fun. But when he’d sat down with the woman at her velvet-covered table and spread the colorful tarot cards out before her, her eyes and tone had pierced him with their gravity.

The candles in the sconces on the wall behind her had made her head seem like it was a floating oracle—probably because he’d been high—and it had mesmerized him. “You are going to have an unusually long life,” she’d said glancing at his palm. “And you will have no lack of good health.”

Somer, sitting next to him, had started sniggering at that point.

Then she looked at the cards on the table. “You’ve had a happy life so far, but you want more,” she said. “A while ago, something inside you led you to seek an unusual path. But this path is not as wonderful as you expected it to be. Something is missing.” Her long bony fingers had stroked at the images on the cards as though she were receiving messages by touching them.

Somer’s sniggering increased in volume, and the psychic had pinned him with her large milky eyes. In a low voice she’d asked him to wait outside because he was disrupting the flow of energy. He’d left without protest, and the psychic had proceeded with Wade’s reading. That’s when she’d gone into greater detail about his current life and his future. She’d commented on his constant travel, his small circle of tight-knit friends, and the loneliness he felt now. He hadn’t said a word to confirm or deny anything, but she’d been right. Vampires tended not to stay in any one place too long. And paranormal creatures tended to be loners, which meant it was difficult to make friends. At the time, Wade had been dwelling on the fact that the last remnants of his human life were fading away. The remainder of his human friends and relatives had died at the beginning of the year, and he no longer had anyone to look in on.

It wasn’t something he ever talked about, so having a stranger home in on his deepest feelings had made them even more real and depressing.

The psychic had swept away the first batch of cards and laid more down. She smiled as she gestured to a cluster of three with yellow backgrounds and pictures involving smiling people holding cups. “Things are going to change for the better. Happiness is on its way.”

He’d perked up at that and hope had streaked through him. He hadn’t realized how much he’d needed it until that moment, however ridiculous the whole thing was.

She flipped another card over. “You’re going to meet your soulmate.” She flipped two more cards over. “Yes. In June, at a place you’ve been before. There will be a lot of people there.”

There was only one place that could be. Here, at the twentieth anniversary of EDC. The reading had ended after that, and a stunned Wade had walked out and told Somer everything. Big mistake. He would never hear the end of it.

He knew the whole psychic thing was a bunch of bullshit. They were notorious liars. It was just that that damn jag of hope had taken root inside him. As the days had passed, curiosity had sprouted from it, one that demanded to be satisfied. And now he couldn’t stop himself from looking at all the girls the way he was. Would he know it was her on sight?

Somer filled her in than smirked and asked, “Do vampires even believe in love?”

Wade glared at him.

“Why wouldn’t they?” Scarlett said, her brown eyes filled with compassion. “Love is amazing. There’s no reason vampires should spend eternity without it. You just haven’t felt it yet, Somer.” Her face lit up as she said, “Someday you’ll see. It’s so powerful and freeing. Nick and I couldn’t imagine ever being apart. Even after all this time, it’s like I can still feel him.” A smile flashed across her pretty face. She was becoming more opaque, the wispy pale traces of her features were filling out and taking on healthy human colors. Her creamy skin was kissed with just a hint of sun, and her brown eyes were kind. Her clothing was the same outfit she’d died in, jean cutoff shorts and a fringed bikini top. She solidified every year on the anniversary of her death.

“So did this soothsayer give you any details at all? Did she describe the woman or tell you how you were going to meet?” Somer persisted.

“Nah, she just said I would meet my soulmate here.” Wade answered Somer’s teasing question for Scarlett’s benefit. Somer had only given her a short synopsis.

“What about a time? Did she give you a time?”

Scarlett shook her head. “You can be a real rascal sometimes, Somer.”

Wade’s fist streaked out in a blur to punch Somer in the gut.

“Oof!” Somer cringed back, hands pressed to his midsection. But the blow failed to wipe the smile off his face.

“No, she didn’t. Besides, if she was right—and I doubt that she is—I don’t have to look for her. She’ll come to me.” Wade shrugged. “Whatever. Let’s head over to Kinetic Field. DJ Momo is coming on soon.”

He turned and began walking, the other two trailing behind him. And, as the last glow of sunlight disappeared, Scarlett completed her shift into solid form.

Restless by nature, Jewel Quinlan is an avid traveler and has visited sixteen countries so far. Lover of ice cream, dark beer, and red wine she tries to stay fit when she’s not typing madly on her computer concocting another romance novel. In her spare time, she likes to do yoga, hike, learn German, and play with her spoiled Chihuahua, Penny.

For more information about Jewel Quinlan