It’s no secret that Patricia Rasey is one of my all-time favourite authors. I’ve been reading her books for over a decade and each one is always better than the last. Her Sons of Sangue series is one of my go-to series that I enjoy over and over again. The latest release in the series, Preacher is sensational and I highly recommend it.

Here is my full official review.
4 Stars!
I wanted to know more about Preacher when we met him in “Rogue” and he was well worth the wait! Danger, intrigue, passion takes readers on a helluva ride. Preacher leaves his new friends behind, pushed to the limit wanting the heroine in the story, Tena & needing to be alone in order to deal with his new “live”. But Tena follows him, driving him nearly insane, and it’s edge of one’s seat as their journey continues and secrets unfold. Though shorter than I’d like, but in no way is this a bad thing, I really just wanted more of Preacher. Ms. Rasey gave me everything I needed, I just wanted the story to keep going and going … forever! I fell hard for Preacher. Who knew I’d like a beard so much!! 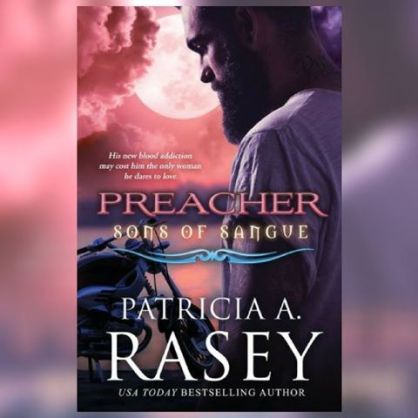 Originally part of the USA Today Best-Seller Taming the Vampire Box Set…now sold on its own.

Foster child, ex-minister, MC member… Vampire. How the hell had his life gotten so jacked up?

His life irrevocably changed when he’s made a creature of the night, Preacher leaves behind his vampire MC brethren, the Sons of Sangue, hoping to shield the woman he desires most from discovering what he’s become. Problem is Tena isn’t about to let him walk out of her life. To protect her heart, Preacher can’t stay. To protect her life, he has no choice but to keep her close.

This book starts off with a bang!!
Here’s a glimpse into Chapter One …

“What the fuck are you doing here, Tena?”

Bobby “Preacher” Bourassa, recently turned vampire and honorary Sons of Sangue MC member, did not know who he expected to be standing on his stoop when the doorbell rang, but Tena Holt certainly wasn’t it. He had left behind Oregon and his new MC brothers to come to terms with what he had become.

A month ago, he thought vampires were nothing more than fictional characters, products of someone’s overactive imagination. Now, here he stood, wanting to tap an artery.

“Well, that’s certainly no way to greet someone you haven’t seen in over a month, especially one as tasty as me,” she added with a tilt of her head, inadvertently offering up that artery.

Tena looked tasty all right. His mouth salivated at the sight of her carotid, beating just beneath her thin skin. If her blood tasted half as good as it smelled, he was certain he’d enjoy every ounce he took.

“Why don’t you and your friend get back in your car and head west … way west, like back to Oregon.”

Her friend and coworker, Chad, stood close behind Tena, giving Bobby the stink eye. A good wind could blow the boy over. Nonetheless, Bobby was pleased to see the young man had accompanied her. It didn’t sit well with him that Tena had made the 2,800-mile trek across the country just to see his surly ass.

The truth of it, he wasn’t good company for anyone, leastwise someone he found himself extremely attracted to. Bobby needed to convince her the short time they had spent together on the west coast was nothing more than a way to pass the time. Thankfully, he had kept his dick in his pants all those weeks ago, which would’ve only served to further complicate matters now.

“Maybe I’ve developed a better liking for the east coast? What made you settle on Ogunquit Beach, Maine anyway? Quaint little town.”

The little rental he acquired had been costly, meaning he wouldn’t be able to stay more than a month or two. Thank goodness he had known the owner from his ministry days or he probably wouldn’t have been able to afford it at all. Bobby hadn’t been able to pass up the ocean front property. It provided him the solitude and isolation he needed to come to terms with his vampirism.

His mistake had been telling Tena his whereabouts, thinking it might help soothe her wounded pride for him having left Oregon without so much as a good-bye. How the hell was he to know she’d head east?

“Cut the bullshit, Tena. You came here thinking I would embrace the fact you followed me clear across the country. You were wrong. Now get back in your car and head out while I’m still in an amicable mood.”

“You do realize how long it took me to get here, not to mention the time off work I had to take?”

She placed her hands on her hips. His gaze took in her long slender fingers and imagined them wrapping his cock. Good Lord! Along with his genetics change and his desire to slurp her blood, his sexual desire had flown off the charts. He was doing all right on his own, that is until he opened the door and found the object of his fantasies within reach. Now, all he could think about was ditching Chad for a few hours and burying his cock deeply inside her.

“I’m betting there won’t be a single room for rent in this town. You certainly can’t expect us to sleep in the car.”

Letting her through the door. Not. A. Good. Idea.

Damn, but she is cute, his devil side posed the argument. Not that he could disagree. He found the woman downright gorgeous. One of the things he really liked about her was the fact she wasn’t model thin, nor did she look like she spent hours in front of the mirror. A wide, black headband, adorned with a copper flower, pulled her short, white-blond hair back from her forehead, leaving a fringe of bangs. Kohl and mascara rimmed cocoa-brown eyes while a sheer gloss complemented pale pink lips, the extent of her makeup. Bobby didn’t think she could look any more adorable or tasty.

“Well?” she asked with a tap of her flip-flop, drawing his gaze to her sexy pink-painted toenails.

He groaned. Was there no part of her he didn’t find adorable? Even her sassiness was a turn-on, for crying out loud. “Well, what?”

Tena’s brow creased. He supposed he should’ve been following the conversation rather than openly ogling the cute little pixie. “Are you kicking us to the curb? Or are you, at least, going to let us hang our heads here for a few hours before we turn the car around and head back to Oregon?”

Bobby considered denying her, sending them both on their way. Because no way in hell letting her through that door was going to turn out to be a good thing.

His penis was becoming far too engrossed on the decision he had yet to make.

Much more and everyone else would note his blatant interest as well.

He rubbed the tension from his neck and grimaced. “I don’t suppose there would be any harm in letting you come in for a bit. One night, Tena. Then you and your scrawny bodyguard are back on the road? Agreed?”

He didn’t miss the smile that crept up on her lips. Round one went to Tena. But he’d have to be a complete ass to send them back on the highway without a lick of sleep. Bobby stood back and allowed them both to enter the small cottage, which garnered them not much more than seven-hundred square feet of space. The little house had two bedrooms and one bath. The four of them would surely be tripping over each other. Damn good thing he had fed earlier from Ivy, the donor he had brought with him from Oregon to satisfy his feeding needs, or no way would Tena be safe anywhere near him.

Hell of a way for her to find out he was a vampire. 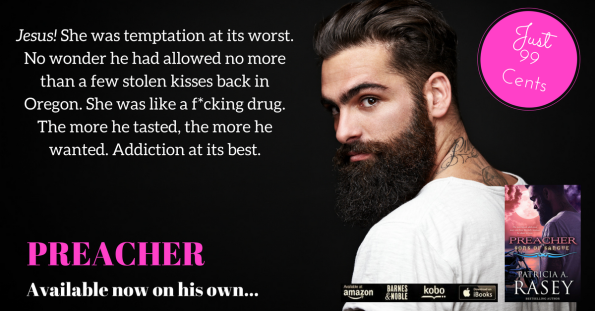 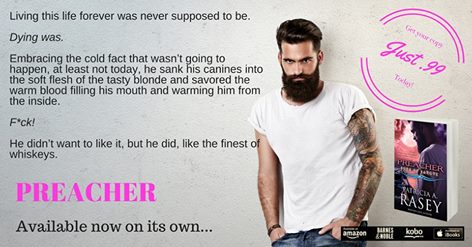