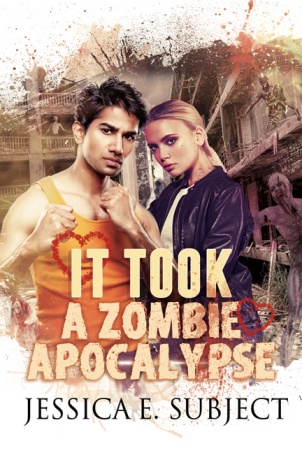 It started with a kiss.

Then the zombies came. Now, Missy must work with the neighbor her parents hate if she wants to survive. But zombies aren’t the only threat to her life, or her heart.

from IT TOOK A ZOMBIE APOCALYPSE by Jessica E. Subject

“Fifty dollars for a kiss.” RJ held the bill and waved it across the counter. “It goes in the jar if I get a kiss from you.”

“I’d do it for five.” She pointed to the paper sign on the jar. “But if you’re willing to donate more, go ahead.”

He walked into the booth and sat on the bench. “You misunderstand me, Missy. I don’t want a peck on the cheek. I want a real kiss, your lips on mine.”

Her cheeks reddened, making her all the more adorable, and she stepped back. “I, um…. It’s not…. I can’t.”

“It’s one kiss.” He waved the money around again, enjoying her discomfort. “The same money you’d make kissing ten old guys w
ith beards, or ten creeps who gawk at your cleavage when you bend over to kiss them.”

The flush on her face disappeared. Maybe he shouldn’t have included that last observation.

“Hey.” He needed her attention back on him. “One kiss, and you never know, you just might like it.”

“Really?” She placed a hand on his knee then waltzed in front of him with a confidence he’d never seen from her before. “You’re that confident of the power of those full brown lips, are you?”

Before he had the chance to think of a response, she snatched the bill from his hand, leaned between his spread legs, and kissed him. He barely had a chance to close his mouth when it was all over.

“Thank you so much for your support.” Missy curtsied then stuck the money into the collection bottle.

RJ gripped the bottom of the bench, trying to process the fact the kiss had already happened. He’d hoped for so much more.

“Another.” He stood and yanked his wallet from his back pocket. “I’ll give you one hundred dollars if I can kiss you.” Yanking the bill from inside the leather fold, he held it out in front of him to prove he was good for it.

“Now, that’s against the rules.”

Her jaw shifted to the side, but when she tilted her head, he hoped she was actually considering his proposition.

RJ hopped off the bench and took a tentative step forward. He’d didn’t want her to automatically say no. “You know I’ve never played by the rules. Why would I start now?”

With a laugh, Missy playfully pushed on his chest. “You’re trouble, RJ. And you’re looking to get me into trouble with you.”

Returning to the stool, he stared into her crystal-blue eyes and smiled. She hadn’t said no. “Just a kiss.” He nodded to a patch of bushes with a bench set amongst them. “No one will see us over there.”

“Is that brown boy bothering you, Missy?”

The twang in the woman’s voice bothered RJ more than her reference to the color of his skin.

“No, Shelley.” Missy turned her back to him. “He was just leaving.”

“Good.” Shelley, another of their classmates, sized up the jar of money. “’Cause we don’t need his cash. We’re doing fine here without it.”

The punch to the gut that used to come with such ignorant comments never came. Some people refused to change, especially in this town. But he’d always believed Missy to be different. Maybe he’d been wrong.

“Are you taking over for me, then?” she asked Shelley.

“Yeah, your dad followed me around for the last fifteen minutes to make sure I was here on time. He was really freaking out about your kissing guys on the cheek.”

RJ walked away. He’d been dismissed. And if Missy’s father was that upset, he was probably waiting with disinfectant or something.

No, there was nothing good about coming back to West Vitula for the summer. His dad still worked the same long hours, so except for the day spent together on the anniversary of his mother’s death, RJ was spending his summer alone.

He turned with the hope Missy was talking to him for some reason.

And she was, standing right in front of him. She grabbed the money he still held in his hand. “You forgot to put this in the jar.” Without giving him a chance to question her, she jogged back to the booth and shoved it through the glass bottleneck.

Did that mean he was going to get his kiss?

Missy raced back to RJ, grabbing his hand then pulling him toward the alcove in the bushes he’d pointed out earlier. She only had a couple of minutes before her father would be breathing down her neck again.

No, if she was to have anyone’s breath on her neck, she wanted it to be RJ’s. After he’d finished kissing her. Or maybe during. But, if her parents caught her lip to lip with him, she’d be dead. At least grounded until she left for Cremshaw again. They still believed her to be a good girl, pure until she married. No way would she confess she’d lost her virginity to a guy she didn’t even know. Still didn’t, only the smell of his cologne. And she’d said RJ’s name in the middle of sex with the stranger. That’s when the guy up and left, leaving her in the dorm bathroom to get dressed before someone else walked in.

She’d crushed hard on her neighbor for years but never had the courage to go against her parents’ expectations until she’d left home.

Sitting on the bench, she pulled him down beside her. “This is long overdue.” She fisted the front of his shirt and leaned into him, closing her eyes. His warm, minty breath met her lips before his soft skin. She nearly melted at the contact, unable to pull away.

What started as a gentle, sweet ballet of a kiss quickly turned into a frantic lambada. Missy clung to him, desperate for more. She straddled his lap, pushing against him. Why had she waited so long to act on her feelings for him? She’d had plenty of opportunities to be alone with him. Yet, what her parents thought had always seemed to matter. Not anymore.

When he slid his hands under her shirt, she moaned, anxious to feel them all over her body.

“Get your hands off my daughter!” 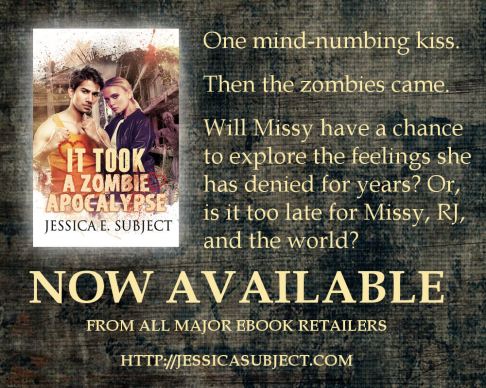 When Jessica is not reading, writing, or doing dreaded housework, she likes to go to fitness class and walk her Great Pyrenees/Retriever her family adopted from the local animal shelter.

Jessica lives in Ontario, Canada with her husband and two energetic children. And she loves to hear from her readers. You can find her at jessicasubject.com. 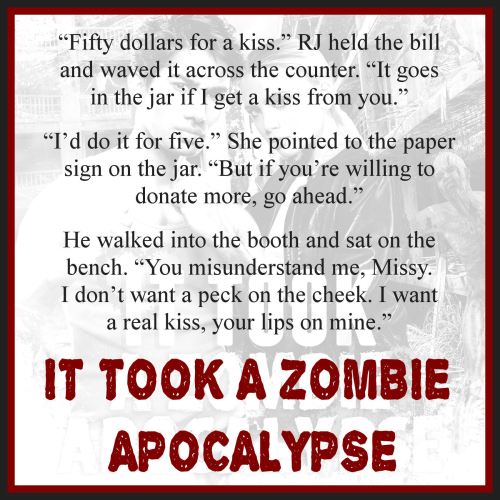 One thought on “Exclusive Excerpt from It Took a Zombie Apocalypse by Jessica E. Subject @JSubject #SFR #IR #Military”