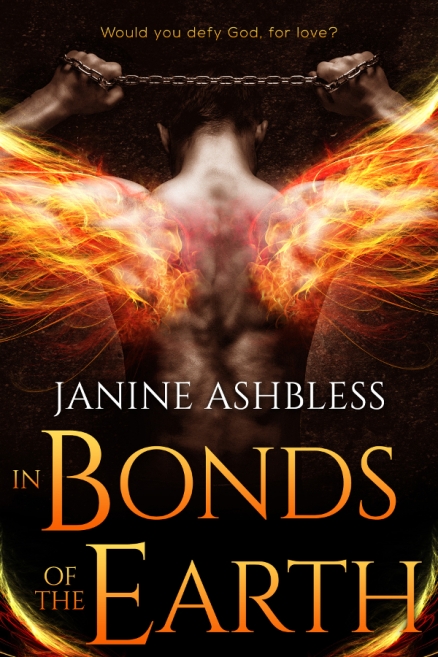 Would you defy God, for love?

“Broad at the shoulders and lean at the hips, six foot-and-then-something of ropey muscle, he looks like a Spartan god who got lost in a thrift store. He moves like ink through water. And his eyes, when you get a good look at them, are silver. Not gray. Silver. You might take their inhuman shine for fancy contact lenses. You’d be wrong.”

Janine Ashbless is back with the second in her Book of the Watchers trilogy, In Bonds of the Earth.

Milja Patek’s bloodline were sworn to guard the fallen angel imprisoned beneath their family church, until Milja fell in love and set him free. Now she has to learn to navigate her new life as wife and plaything to Azazel.

Angel or demon, protector or tyrant, right or wrong, Everything Milja once knew has been flipped upside down and all she can do is follow her heart, even if that means waging war against Heaven and releasing the rest of the fallen.

When Milja Petak released the fallen angel Azazel from five thousand years of imprisonment, she did it out of love and pity. She found herself in a passionate sexual relationship beyond her imagining and control – the beloved plaything of a dark and furious demon who takes what he wants, when he wants, and submits to no restraint. But what she hasn’t bargained on is being drawn into his plan to free all his incarcerated brothers and wage a war against the Powers of Heaven.

As Azazel drags Milja across the globe in search of his fellow rebel angels, Milja fights to hold her own in a situation where every decision has dire consequences. Pursued by the loyal Archangels, she is forced to make alliances with those she cannot trust: the mysterious Roshana Veisi, who has designs of her own upon Azazel; and Egan Kansky, special forces agent of the Vatican – the man who once saved then betrayed her, who loves her, and who will do anything he can to imprison Azazel for all eternity.

Torn every way by love, by conflicting loyalties and by her own passions, Milja finds that she too is changing – and that she must do things she could not previously have dreamt of in order to save those who matter to her.

In Bonds of the Earth is the second in the Book of the Watchers trilogy and the sequel to Cover Him With Darkness.

Roshana? I spun so quickly on my new heels that I lost my balance and, toppling, clipped my glass against a display case. My champagne flute shattered at the stem. “Oh crap!” I yelped—and looked up into a face that wasn’t Roshana’s at all. The face of the man I least wanted to ever see again in all the world.

The least, and maybe the most.

Egan Kansky. The man who’d saved me and betrayed me. The man who’d snatched me from under the noses of my Orthodox enemies and taught me to trust him, only to try to deliver me to his own masters.

Egan, who’d done his best to bury Azazel for an eternity of torment again, for the good of us all. I’d let him hold me as we slept together. He was the gentlest, most caring man I’d met apart from my own father—yet I’d seen him coldly shoot dead the thug who tortured me.

Egan: Irish-American, ex-military, now Vatican agent. He’d stepped in front of a bullet for me.

There were no words for the confusion of feelings in my breast right at that moment, seeing him there before me. His square face looked a little more lined than I remembered, but his sandy-blond hair still stuck out over his forehead and his eyes were still that blue strangely flecked with gold; eyes for staring at horizons. The formal evening jacket suited him; way more than it would Azazel, say.

“Egan?” Go away, go away, I can’t bear to see you, I thought, but the words refused to rise to my lips. “What are you doing here?”

I was actually shaking.

He didn’t answer. Instead he sank to his knees before me. It took a moment for me to realize what he was doing; picking up the pieces of my broken glass. Standing again, he dropped them deftly on the tray of the waiter who’d hurried over. “Thank you,” he told the young man.

“I’m sorry,” I gabbled to the waiter, “I’m not used to wearing heels.”

“No problem, madam. May I get you another glass?”

The distraction reset our conversation. As we looked back at each other Egan smiled, tentatively. “Hello, Milja. How are you? You’re looking…very well.”

I blushed, wishing that the saleswoman hadn’t persuaded me into a dress quite so short or so tight, wishing that my hands weren’t trembling. “I’m good.”

The depths of all that we dared not speak about yawned like the Grand Canyon. “You made it out then?”

“Yes. I walked.” He gestured with open hands. “Then hitch-hiked.”

I brushed my fingers over my face, wanting to hide.

Of course. The last time he saw me I’d just had my finger broken. “It’s fine. He fixed it.” I didn’t have to say Azazel’s name.

Egan nodded, sucking his lips in. “Are you still with him?”

“You don’t need me to tell you that, one way or another,” I said, finding some backbone at last. “Your people will have been keeping an eye on me, I assume.”

He looked suddenly uncomfortable. I got the distinct impression he was winging it. “I’ve recused myself from that particular mission.”

“Sure, I told my superiors that I couldn’t in good conscience accept their plans for you.”

Imprisonment. Breeding. The murder of my children. “I bet that was a fun conversation.”

He grimaced. “That it wasn’t. But they accepted it. I’m not here on their behalf.”

“You’re not planning to kidnap me, then?”

He shook his head. “No. You won that round, Milja. You were right and I was wrong. You know how I feel about what happened.”

“That it’s not right to do a heinous evil for the sake of doing greater good later. I slipped into error while spending time with you, unacceptably so.”

“What—liking me? That was an error?”

“No.” His pale eyes narrowed with pain. “Betraying your trust. You were an innocent. I ask your forgiveness.”

That was it: his apology. I stared at him mutely.

“Liking you…” He blinked and looked over my shoulder. “It wasn’t what I planned. It messed things up, from the point of view of my superiors. But I don’t regret it.”

My eyes stung and my throat felt swollen, but I knew no tears would slip down my face. “Thank you for letting me choose,” I said, my voice a wobbly whisper. “You did let me choose, didn’t you?” Between you and Azazel?

“I chose him. Now go away. Please.” I turned my back on him, staring blindly into the reflection of the glass case.

From behind, he put both hands on my waist. My world flipped upside down. His breath was on my hair, his warmth against my back. “Milja,” he whispered, his lips soft against my ear, “that’s not forever. You can change your mind.”

If Azazel sees this, I don’t know what will happen.

I shut my eyes, swaying, almost leaning back against him. I wanted him to slip his arms right around my waist. I wanted to turn within the circle of his arms and press my face to his chest, breathing in the warm sweet scent of him.

Here’s the thing, the terrible stupid thing. Azazel loved me, Azazel was powerful as a thunderstorm, and he would protect me from men and angels even if he had to tear the world apart and drown it in blood to do that. But I never, ever felt safe with Azazel. I felt safe with Egan. Even with everything I knew and everything I guessed, even in moments of horror and rage, there was a part of me that instantly and instinctively fitted into the shield of his arm, that felt like this is my home, I belong here. I could think of no other way to articulate it to myself.

“Choose again,” he whispered, sending shivers from the whorl of my ear down my neck and my spine, right inside me. “Please—come outside with me. We need to talk.” 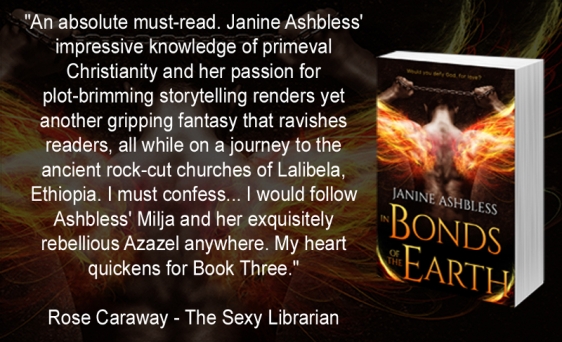 Janine Ashbless is a writer of fantasy erotica and steamy romantic adventure. She likes to write about magic and myth and mystery, dangerous power dynamics, borderline terror, and the not-quite-human.

Buyer beware! If you like dark romance and a hard-won Happily Ever After, try “Cover Him with Darkness,” “Heart of Flame,” or “The King’s Viper.” If you prefer challenging erotica, go for “Red Grow the Roses” or “Named and Shamed” instead. All her other books lie somewhere on the spectrum between.

Janine has been seeing her books in print ever since 2000. She’s also had numerous short stories published by Black Lace, Nexus, Cleis Press, Ravenous Romance, Harlequin Spice, Storm Moon, Xcite, Mischief Books, and Ellora’s Cave among others. She is co-editor of the nerd erotica anthology ‘Geek Love’. 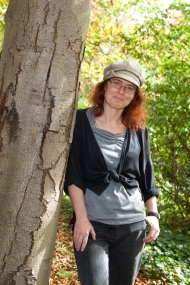 Born in Wales, Janine now lives in the North of England with her husband and two rescued greyhounds. She has worked as a cleaner, library assistant, computer programmer, local government tree officer, and – for five years of muddy feet and shouting – as a full-time costumed Viking. Janine loves goatee beards, ancient ruins, minotaurs, trees, mummies, having her cake and eating it, and holidaying in countries with really bad public sewerage.

Her work has been described as:

“Hardcore and literate” (Madeline Moore) and “Vivid and tempestuous and dangerous, and bursting with sacrifice, death and love.” (Portia Da Costa)

You can find Janine on Facebook or at her website or blog.
Author picture credit to David Woolfall.