HIS GUARDIAN WITCH
by Angelina Rain 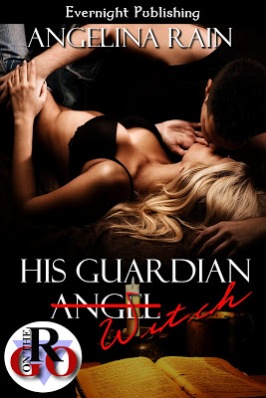 Is love stronger than magic?
Morgan has never encountered a spell she couldn’t cast or a curse she couldn’t break. With her natural knack for witchcraft, she runs a magic store that helps others. When a handsome but cursed man walks into her store, she is pit against magic stronger than her own.
Daniel lived an ordinary life before he ended up on a witch’s bad side and was jinxed with non-stop bad luck. Out of sheer desperation he visits Morgan’s Magic Shop. Morgan agrees to help him and they must work together to find the witch and pinpoint the hex she used in order to undo it. As they search, feelings ignite and a romance blossoms. Will this bad luck spell end their love, or will their love be strong enough to break the incantation?
Be Warned: sex toys
Excerpt:
Morgan opened her eyes and watched as the glittering aura lights danced before her. They reached the window and passed through the glass on the way to the girl. Once all the lights were gone, she glanced at Daniel. A big smile crossed his handsome face, but her attention went below it. A rock rose inside his pants, large and long. She gulped, and the need to see it minus his jeans suddenly grew too strong.
No, she shouldn’t look. Instead she closed her eyes and tried to conjure up more peaceful images of nature and sunlight. Those images didn’t come though. Instead, she saw her silky bedroom sheets.
Her body lay on those sheets, writhing in passion as her legs spread open and in the air. Daniel’s head bobbed between her thighs, and his tongue lapped at her warm, natural juices.
She gulped, gasped, and opened her eyes.
His lustful gaze met hers. Lust that matched her own and her heart pulsed fast inside her chest. Her center grew damp, and she longed for his touch.
“I think your thoughts were similar to mine.”
She didn’t reply to Daniel’s statement. Instead, Morgan tried to stand. Her knees grew weak as she rose to her feet.
Daniel stood, too. “You can’t deny you were thinking about it, too.”
“I wasn’t denying anything.”
He crossed to her and wrapped his arms around her back. Warmth filtered through her, and Morgan felt herself blush. When he spoke, his breath tickled her skin. “I was thinking about how good it would be to lay you down in my bed.”
“You don’t have a bed. It was stolen.”
His chuckling made her wetter. There was something so sexy about his voice. “The floor, then.” Daniel pulled her closer to himself until she rubbed against him. His hard cock pressed into her navel, and she tilted her head upward to meet his gaze. His lips brushed hers. The kiss started tender and slow. She opened her mouth to invite him inside.
She lay on the floor, his body pressing into hers. His hands touched her sides, slipping under her shirt. His lips left hers and instead kissed her neck. He found her breasts, rubbing his palms over her nipples. Only the thin lace of her bra separated her flesh from his.
Morgan moaned. The need inside her multiplied, and she wanted to touch him, feel him, taste him. She flipped him over until she was on top and he on the bottom. She raked her fingertips over his chest and abs, feeling the hard muscle beneath the black t-shirt. But feeling and seeing were two different things, and she wanted to see. Taking the hem of his shirt, she raised it until his smooth and taut skin lay open for her to feast on. She ran her tongue over the ridges of his six-pack.
Daniel inhaled sharply, and she smiled as she kissed him right below the belly button. Morgan glanced at the trail of hair leading to somewhere below his pants. She undid the button, her hands on the zipper.
“Is this supposed to happen?”
She tried to glance at his face, but who was she kidding? The hardness in his pants was more appealing. “You mean the hard-on. It means you’re excited. It’s totally natural.”
Morgan met his eye, and he shook his head. His gaze moved somewhere beside and beyond her. “No, I mean is the candle supposed to fly?”
“Shit!” Morgan pushed away from Daniel. She watched, bewildered, as black and dark blue winds danced around the room. The candle was high off the floor.
“I’m guessing something is wrong.”
“Very wrong.”
The flame didn’t go out despite the sudden winds in the room. It rose, high and strong and fierce. Then the wind died quickly. The candle dropped to the floor. Flames danced over the hardwood planks. The fire happened too quickly to be natural. Some sort of magical force was behind it.
“Come on, we have to go!” She urged him by pulling his arm until he stood and ran behind her. Once they were outside, her fingers fumbled with the buttons on her phone as she dialed 911. Daniel stood beside her. His face was white, whiter than the nice tan he had all day. “What…” He stuttered. “What just happened?”
“The spell didn’t work. Peace and forgiveness didn’t get to her. Something repelled them, and her anger came at us, manifesting itself as the wind. This spell is stronger than I first thought. Something or someone is controlling it.”
BUY YOUR COPY AT:
Evernight Publishing
Amazon
BookStrand
All Romance eBooks
FIND ANGELINA AT:
Website: www.angelina-rain.com
Blog: www.angelinarain.blogspot.com