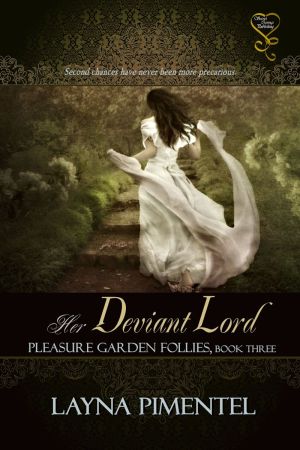 Warning: This book has elements of: light bondage, and ménage.

Blurb:
Bastian Wycliffe, the Earl of Wendelhem, has finally moved on…or so he thought. En-route to a hunting trip after over-indulging the night before, he endures a frightful and terribly embarrassing swoon. He’s seen a ghost and her name is Cordelia Waite, the Duchess of Downsbury.

Mrs. Weylen, formerly a duchess, has a secret. All it took was the chance meeting in the inn that fateful night for her memories to come back and haunt her. She makes haste returning to London incognito with the intent to clear up misconceptions and to deliver an ultimatum to her former lover.

Yet, when a new found obsession refuses to accept the truth, and her imprisoned husband discovers she’s still alive, their lives and relationship may be in danger. Second chances have never been more precarious.

Extended Excerpt:
Cordelia noticed that his hair was mussed from the back. Has he been entertaining a woman upstairs? Has he truly moved on and found another lover? Her heart sank at the prospect. How could he replace me so…so…so…soon? It has not even been a full year.

Her hands trembled beneath her cape, and she could barely stand on her own. How she wanted to throw her arms around him and tell him how much she missed him.

“Thompson! What is so important that it could not wait until morning? Has anything happened?”

“Be easy, man. I assure you, Isabel and Emily are fine. I simply came here to escort a woman who desperately wanted to see you.”

He scoffed. “If this has anything to do with Mary Elizabeth, I—”

The marquess nodded, and Cordelia stepped forward into the glowing light of the fireplace. Bastian turned toward her, and when she lifted the hood of the cape, his eyes widened and his mouth gaped before he crashed to the floor from swooning.

“Oof! I have to admit, I did not quite expect that response.”

Cordelia abandoned her cape where she stood and ran over to him, dropping to her knees. Good heavens! What have I started? The man probably thought he was staring at a ghost. “Wake up, my love!” she whispered as the butler walked in.

“He just swooned. I have it under control. If he was entertaining upstairs, can you see to the lady and have her sent home immediately? He will need some rest, and I am certain he will want some privacy.”

“Certainly, sir. I shall have her removed immediately.”

So, he was entertaining another woman. How could he… Fury simmered beneath the surface of her calm facade. Why had he never come to confirm if the reports were true? She always knew Richard would never waste a minute on her, but Bastian… They were so close. Kindred spirits. He should have been able to feel, somehow, that she was alive.

Disappointment washed over her. Instead of fawning over his swoon, Cordelia jumped to her feet, walked over to sideboard, and grabbed a bottle of port. Then, she returned to him and began to unscrew the cork.

“Cordelia, what are you doing?”

“Getting him to come out of his swoon.”

“Yes. Do you take issue with my course of action, my lord?”

The marquess stepped away and waved for her to continue.

“If you would rather leave, I am quite capable of waking and caring for him.”

“I will leave the two alone once I am assured you can stay. Though we should not stay too late.”

“And I assure you, my lord, once I have said what I have to say, he will probably want me removed from the premises immediately.”

“In that case, I will wait in the hall for you.”

Once his lordship closed the door behind him, she dumped the bottle of port over Bastian’s face. He sputtered at first, and when his eyes opened wildly, followed by oaths being muttered, he stared at her and jumped to his feet.

“Damnation, woman! You are alive!”

He practically collided into her to embrace her, and all she could do was slap him. Her hand stung from the impact. She instantly regretted her action, but how else was she to express her displeasure at his courting another woman?

Bastian growled at her. “What in the world was that for?”

“That was for not looking for me! And if I were you, I would stay back. I am liable to slap you again for entertaining other female guests.”

“Cordelia…please! You have to understand. All of the ton thinks you are dead. Hell, everyone thought you dead. The carriage was decimated.”

“But you did not come, not until that night in the inn, and even then, you were not searching me out. Tell me, how many whores have you entertained since my supposed death? Has anyone come close to pleasuring you the way I did so faithfully.”

The earl shook his head at her with vehemence. “Sweetheart, had I suspected there was even the smallest chance of your survival, I would have sought you out.”

I doubt that. “When you decide to come to your senses, I am only in town for a few more days. I did have much to say to you, but I am so furious with you right now, ’tis best I wait.” She walked toward the door.

“Cordelia…wait…” Stay here, love. There is plenty of room.”

“I did not travel alone. And, unlike you, I have a responsibility to see to. Adieu.”

*For Kobo users: an epub version of this book can be purchased from Secret Cravings Publishing or All Romance eBooks, which is compatible with your ereader*

Want to be the first to catch some sneak peeks into my upcoming releases, subscribe to my newsletter here: http://eepurl.com/FOPP1

Runner Up: One ebook from my backlist, winner’s choice. (Excluding: Her Deviant Lord)

To qualify you must subscribe to my quarterly newsletter. Please refer to the rafflecopter link to document your entry.

Born and raised in Toronto, Ontario, Layna discovered her love of reading at an early age. When she isn’t devouring salacious romance novels or writing, she enjoys losing herself in researching ancient history and mythology, weaponry, and hiking. She lives in Northern Ontario, with her husband and two daughters.

Layna is a member of the Romance Writers of America, and is a monthly contributor at 69 Shades of Smut. For updates on her upcoming releases, or to leave her a comment, you can find at:

3 thoughts on “Her Deviant Lord Giveaway and Newest @LaynaPimentel Release”