Thanks, Kacey, for having me on your haute blog!
I am so excited to share an excerpt of my new paranormal romance Love Entwined, A Cardiff Novel Book 2. Jewelry designer Amelie Laurent is on assignment in the wilds of Yorkshire that will change her life. 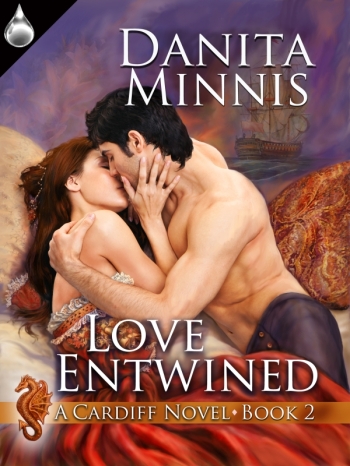 Blurb:
Run, little witch…
Amelie Laurent is on her way to the top of the jewelry designing world with no time for men. Her orderly life is about to come undone when jewelry tycoon Roman Cardiff steals her away on assignment to a remote English estate. Roman wants Amelie all to himself but St. Clair Manor’s resident ghost has been waiting for her much longer than he has.

Run home…
An unseen gunman takes a shot at Roman and he blames a business rival. But Amelie and Roman are to blame, for falling in love 200 years before in a time neither of them remember.

From the heartbreak of pre-Revolutionary France to modern day corporate wars, Amelie and Roman uncover a history of blood jewels, lust and demons.

Good witch, bad witch, you must decide…
When Amelie discovers her inner witch she learns the real reason she was summoned to St. Clair Manor. Il Dragone will kill to get her back. Amelie will kill if they do.

Excerpt:
My favorite color.
Amelie stared up at the yellow-gold satin fringe of the canopy on the four-poster.
“Beautiful, is it not?” The woman stood near the balcony doors. Her French was soft and seductive. Her face was in profile as she stared out at the black night. There was a single bedside lamp on and shadows clung to every corner but Amelie remembered those auburn curls tumbling down the woman’s back. “Everything in this manse is beautiful.”
Amelie glanced at the canopy fringe again and tried to form an answer, but no words came out. She wanted to see the woman’s face, and leaned up on her elbows. There was a dull ache between her eyes but she was more interested in the woman.
The wind whipped at the balcony windowpanes as the woman stared into the dark.
The balcony doorknob rattled.
Amelie drew her eyes away from the windy night and whispered in French, “I am Amelie.” She cleared her throat, which was as smooth as sandpaper.
“Welcome.” There was amusement in the greeting. High cheekbones lifted with a smile.
She did not want to seem ignorant of the fact that Roman was married if indeed he was, and so she waited. The woman did not introduce herself and she would not look away from the howling night. The wind at the panes reminded Amelie of the lashing waves in her dreams…
“Hello, sleeping beauty.” Roman came through the bedroom door with a tray. He placed it on the nightstand. “You must have just woken. I brought you water.”
“Oh, thank you.” She sat up against the pillows and took the proffered glass. She drank half of it before he took the glass from her.
“Not too much. How are you feeling?”
“Fine. I was just talking to…” She glanced at the balcony doors, and blinked to clear her head. The woman was gone. The doorknob no longer rattled and the night was calm.
“Talking to whom?”
Amelie pointed to the double doors. “She was standing right there.”
“Anne?”
“No, a young woman. French. In a…some sort of dressing gown, I guess.”
“Caroline in a dressing gown? She’s much fonder of starched linen.”
“Your wife?”
“Not in this lifetime.” He chuckled. “The live-in maid.” He walked to the wall and turned the light switch on. “She’s not here now, and she’s not French.”
It was not a room she lay in, but a large suite. Yellow-gold satin covered the walls and English primroses the same hue adorned a table by the balcony window. On a far wall, a sofa and two chairs sat before a fire crackling behind a wrought iron grate. She hadn’t noticed it before; her attention had been on the woman, and the wind.
“What am I doing in here?”
He sat down on the comforter. “You were looking at one of the portraits in the gallery and fainted straight away. Not exactly the way I planned to sweep you off your feet.”
“I am sorry for the inconvenience.”
“The pleasure was all mine.” He grinned and pressed the back of his hand to her forehead.
“You’re not feverish. Have you been ill?”
“No, I…I guess I’m just tired.” She could not explain what had happened to her.
Fearing a confession would leap from her throat in her agitated state, she shut her mouth.
“Are you sure? I should call Dr. Latham…”
“No, please, I’m fine.” She turned on her deal-closer smile that worked so well in the city. However, she didn’t feel anything had closed. She had the distinct impression a door had just opened. To what, she did not know. At least she was here in England. In her dream house. She would find answers to her questions now.

Bio:
Danita Minnis grew up singing and once thought she would do that all her life. She soon found writing just as fulfilling and writes paranormal romance. She loves mystery, mysticism, the fantastic and the fey. She has published The Cardiff Novels, a series about one family’s trials with vengeful demons, a legacy of ghosts and mysterious blood jewels. She is currently working on the third novel in the Cardiff series, which introduces the Cardiffs’ connection to ancient vampires.
Danita is a member of Romance Writers of America. She is a lover of chocolate, a good, scary movie, kittens and pups – especially Siberian Huskies. When she is not writing, she exercises her lungs at her son’s soccer matches and their favorite theme park, because everyone knows it’s easier on the stomach to scream your way down a roller coaster.