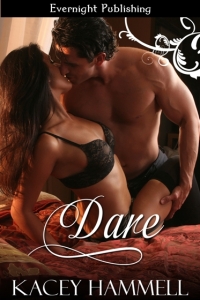 “Let’s take this into another room, shall we?”

Olivia leaned her head to the side—her gaze full of fire—and shivered. With her small nod and sweet smile, he sat up and placed one arm around her back and the other under her knees.

He stood, picked her up with ease and turned. “Dare,” she chided, voice hoarse. “I can walk.”

He rubbed his lips against hers. “Why walk when you don’t have to? Besides, I want to keep you in my arms.”

Her eyes lit up with delight. She’d never looked more beautiful. His mouth took hers again, tongue plundering. His body tightened. He needed and wanted her more than any other woman he’d known.

He dragged himself back, and asked, “Which way?” He started down the hall, turned right at the door she pointed to.

He crossed the threshold, his gut clenching as he surveyed the room.

The more he came to know her, the more he discovered that under the ‘hands off’ attitude she was a firecracker.

A small lamp lit the room added a sensual feast for the eyes and created carnal thoughts. Deep burgundy and gold filled the area.

If he wasn’t mistaken, the cherry wood sleigh-bed was made up with silk sheets. A sheer golden canopy surrounded the bed.

A dark colored carpet—he would guess rust-colored—was thick and plush. His sock feet appreciated the cushion beneath. Gold and orange candles covered every empty space on her dresser and vanity table.

His gaze shifted, he noticed the dark curtains. They were thick and heavy enough to shut out daylight.

It was a secret haven made for lovemaking.

His gaze locked on the woman in his arms, and grinned. He could really fall for her. He wanted to learn the many facets to her.

However, he had to be patient. He wanted to take his time, uncover it all, bit by delicious bit.

He carried her to the bed, laid her on the mattress, and covered her body with his, elbows on each side of her.

Her dark hair spread out on the burgundy comforter like a satiny wave. He was right: the bed had silk sheets, soft to the touch and smelling of cinnamon. He wanted to close his eyes and breathe it all in. The scent was sexier than he’d ever thought possible. Another aroma he would always connect it with Olivia. She was surprise with a capital S. And he loved surprises.

“This room suits you.”

She smiled and stared up at him. “You think so?”

“Oh, yeah.” His voice hoarse, his fingers slid into her hair, spread it out more. “Beautiful, sexy, powerful. A man might never leave it.”

She giggled. “Some days I don’t want to leave it either. I’ve always loved these colors. They’re so deep and sensual. I feel…”

He tipped her chin back to him. “You feel what?”

“It’s silly, really. Just kiss me.” She lifted her head toward his lips.

“I’ll kiss you, Livvy, anywhere you want, but tell me first.”

A shudder rolled through her body at his words.

He lowered his head, lips just shy of hers, breathing heavy. He wanted to taste her again, needed to, but held back.

“Tell me,” he whispered.

“I feel sexy, really like a woman, when I’m in this room.” Her body moved against his, igniting him further.

His hand stilled in her hair. The other slid over her cheek. His fingers caressed her lips and glided down her neck. Soft, flushed, her skin heated beneath his fingers.

“You’re more woman than you know. The epitome of a woman, I’m coming to realize.” His eyes burned down into her dark green ones, his lips hovered over hers, and the words came easy. “I always thought you were stunning but tonight you’ve shown me you’re so much more. There’s a deep, sexual woman—a controlled woman—that I want to get to know better. I need to know you.”