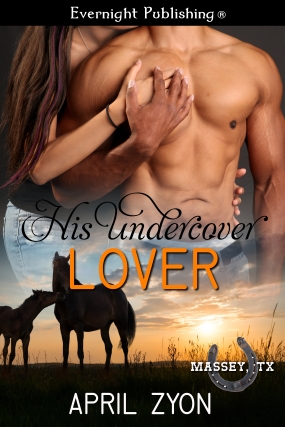 Blurb:
Working undercover either has its perks, or it has serious downfalls. For Megan Jenkins, working as a stripper to uncover the illegal activities happening in Massey, TX, was definitely not her idea of fun. If she’d wanted men to leer at her half naked self, she was pretty sure she could have come up with something a lot more entertaining. For herself at least.

She’s been driving him more than a little crazy since he came to town. Simon Markham isn’t the sort of man to give up though. As a Marine he understands the need for stealth, and is more than willing to let things play out but only to a point. When Megan’s case begins to show promise, and not the good kind, he isn’t willing to stand idly by any longer. Whether she likes it or not he plans on watching over her, each and every single inch if he has his way.

Things begin to unravel for the Mayor of Massey when Megan and Simon stumble onto new information. The man becomes so desperate he actually kidnaps her to ensure she can never speak of anything she’s learned. But Megan knows that Simon isn’t about to let the man get away with it. Her Marine will come for her, and God help anyone in his way.

Time is ticking, the noose is tightening, and the bad guys think they are free and clear. They didn’t count on the DEA, and one very determined Marine to put a serious dent in their plans.

Rescuing Megan hadn’t been in his grand plan to woo her, but Simon isn’t about to let anything get between him and the woman he loves. Come hell, or high water, he fully intends on marrying his undercover lover.

Holding his cup up, he tipped his head to Mercy when she refilled his coffee. “Thank you,” he said. When she patted him on his head, he rolled his eyes.

Brant Carver, Mercy’s husband, was laughing into his own cup of coffee. His expression changed to something softer when Mercy moved closer to him. Lowering the cup, he let her fill it, tipping his face up for the kiss she dropped on his lips.

Unable to help himself, Simon rolled his eyes again. This time, he knew no one saw him do it. They were too into one another. Taking a drink of his coffee, he set the cup down, and then began to drum his fingers on the table top. As the kissing continued, he progressively got louder, and louder.

Finally, Brant pulled away and turned a glower on him. “Is there a problem?”

“Was trying to determine if I should go to another room or not.”

“Well, given past experiences, I figured you were about ten seconds from tossing her onto the table and stripping her naked. Or maybe stripping her naked, and then throwing her on the table. Little unsure on that part. But I knew the end result would be something seared into my memories for the rest of time.”

Simon shot Mercy a grin as she turned pink. Brant was a rather interesting shade of red as well, likely more pissed than embarrassed, though. “Just saying it like it is. We all know how you two are, and you asked me over here for a reason, so spill it so I can get back to helping Vic with whatever insane project he’s dreamed up today.”

Brant really didn’t look amused, but he did seem to agree getting down to business was best since he let Mercy go and faced Simon across the table. “I need a favor,” he said.

“Gee, like I didn’t guess that from the phone call I got.”

“Are you always this much of a smart ass? Rhys never once mentioned you were a smart ass.”

“Rhys doesn’t know everything about me, or any of the guys really. But he does know I have a tendency to be a smart ass when people behave like I’m an idiot that needs to be led around by the nose. Spit it out already, Brant, or I’m heading out and you can talk someone else into being the sucker to watch over Megan.”

Snorting at the stunned look he got from Mercy, and the barely there flinch from Brant, Simon sat back in his chair. “Really, you two? Anyone that’s been in this town for more than an hour, and pays even the slightest bit of attention, knows that something’s going down. The fact that I happen to know several people out in this neck of the woods has allowed me to draw my own conclusions.”

“Well,” he drawled slowly. “Like the fact she’s not actually a stripper. She’s an undercover DEA agent working on a case that happens to have deep roots in Massey. I know she’s been digging around looking at the mayor. She’s also looking to see what she can find in regards to drugs being funneled into and through Massey. She’s close, but she’s missing something. Otherwise, she’d already be out and on vacation instead of going into the club every single night to shake her nearly naked ass for singles.” Simon shot Mercy a quick look before focusing on Brant again. “I know you’re DEA, you’re also the agent in charge down here since being reassigned so you could be closer to Mercy. You have a number of big busts under your belt, several commendations, and narrowly avoided getting stuck on the hook from another bust when some wanker took a case from you and fucked it up royally. Got his dad, your boss at the time, fired as I recall.”

“You can’t go in to keep an eye on her since everyone in town knows your face. That and the fact you’re married to her twin sister. Might raise more than a few brows, and it’s not something you want getting around. Plus, given the smarts of the folks in Massey, they’d soon clue into the fact that you weren’t there to watch the girls but because of your job. Questions would then be raised, and if spoken of in the wrong place, the whole operation would go tits up, as it were.”

Brant grunted at him, and crossed his arms over his chest.

Taking it as a sign to continue, Simon took a sip of his coffee. “Good brew, by the way, Mercy,” he said. “So you want me, a single guy, new to town, to go in and keep an eye on her. It won’t seem too strange if I’m hanging around, especially given the fact that Crank’s out of town visiting relatives, and Vic’s making kissy faces at his bride. I’m odd man out, and need to find something to fill my time with at night. How am I doing now?”

“Rhys never mentioned you were practically a mind reader either.”

“I’m not, but I know people. I’ve also taken a few behavioral courses from the Feds over the years. I also have degree in psychology. Never put it to any use, but I figured I could always use it if the military didn’t work out, or if I needed a career when I got out. I watch people, take note of what they say, and what they don’t say. Then I start adding it all together.”

“Well, you’re right on pretty much everything,” Brant told him.

“So what am I wrong on?” Simon asked.

“Not much, except the premise I’m asking you to take on. Given you are new to town, and have been seen with Megan a couple of times, I want you to go in as her new boyfriend. Unhappy with her working the club, but since she’s bringing in the big bucks and enjoys the money, you’re there to keep an eye on her while she does work.”

“Uh-huh,” Simon said. “And you’ve cleared this with Megan, right?”

The look on Brant’s face said it all. “Not yet,” Brant told him. “Wanted to see if you were up for the task first.”

Snorting, Simon shook his head, and closed his eyes to rub at his lids. “She’s going to shoot you, you do realize that, right?”