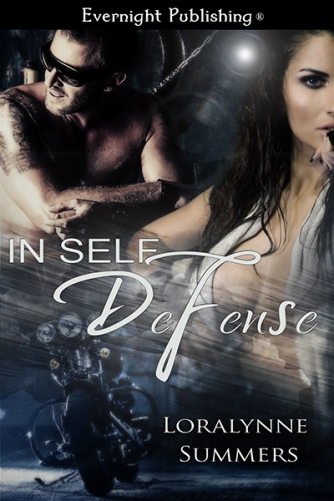 Q) How did you come up with the story?
I was mowing the lawn! It was a hot and humid day, and then my neighbor came home on his Harley, and suddenly the story was there in my head! I liked the idea of my hero being a bit unconventional. While a good guy at the core, he’s a biker and a bit rough around the edges. See more below…

Q) Do you have any writing habits?
I am a total pantser. I don’t plot, I learned quickly that if I tried to make the characters do what I thought should be done, the story sucked and wouldn’t flow. As soon as I gave my muse carte blanche, things went much more smoothly! So I do what I’m told now. Some stories I need complete silence to write, others I have to have music playing. And the music varies depending on the story, and sometimes even what part of the story I’m writing.

Q) How much real life do you put into or influences your books?
I’ve noticed that in most of my heroes there is some part of my husband, be it mannerisms or other little quirks. In one story my hero is total freak about a specific car, which is all my husband. There’s a bit of myself in Sarah, and a big part of the start of the relationship between my husband and I in Sarah and Jason’s. I too fell in love with my best friend after leaving an abusive ex. My husband is very much responsible for the sense of self-worth and self-esteem that I now have today. He put me back together emotionally, just as Jason did for Sarah.

Q) Any upcoming projects?
I have a paranormal series of full-length novels that I’m working on, a fantasy of undetermined size that I currently view as my Dark Tower (by Stephen King) – I don’t think it will ever be done, but I keep plugging away at it in bits and pieces here and there, and the story currently screaming the loudest in my head is a contemporary ménage, likely novella length, that I hope to finish soon.

INSPIRATION FOR THE STORY:
The story opens to Sarah mowing the lawn on a hot, humid day. And that’s exactly what I was doing when the idea first took root in my brain. My neighbor across the street arrived home on his Harley, and BAM! The whole opening scene was there in my head. I couldn’t type fast enough. There is a large part of my relationship in this story. Jason has some of my husband’s mentality, mostly in how he treats Sarah. I often tell my husband that I don’t deserve him, he is way better to me than I am to him! As for Sarah, I too fell in love with my best friend after leaving an abusive relationship. Thankfully, mine never reached the level of physical abuse, but the signs were all there, and it was only a matter of time. As in the story though, I was quite afraid of my feelings for my husband, because of how close our friendship was and I was terrified to ruin it.

She fell in love—in self-defense…
The last thing that Sarah wants in her life is a relationship. Her track record was horrendous, and the last guy she’d dated had beaten her mentally and physically, landing her in the hospital. Almost a year later she’s back on her feet, thanks in no small part to her best friend Jason. Trouble is, lately she wants more than a friendship with Jason, and it scares the hell out of her. And then he kisses her…

His offense may hit a brick wall…
Jason has been in love with Sarah for longer than he’ll willingly admit to. Since bringing her home from the hospital, she’s grown into a strong, secure, confident woman. After seeing how perfect his best friend really is, he can’t get her off his mind. He’s convinced her feelings match his, and decides to go for it, only to scare her away.

Can best friends become something more? Or will she stay hidden behind her defensive wall?

“Why are you carrying me fifty feet?” Sarah asked.

“Because I can. Because I’d be a jerk to make you stumble around on those shoes when you could fall and get hurt. But mostly because it’s my fault they’re broken in the first place.”

“Jason, I’m the one who gave Alex a roundhouse kick to the head in these things.”

“And you have no idea how proud I am of you for that. Doesn’t change the fact that I wasn’t there to protect you when he showed up, and I should have been.”

She sighed, settling her head on his shoulder. “It’s okay,” she whispered. If he could beat the shit out of himself, he would. It had been eating away at him from the moment she’d thrown herself at him and wouldn’t let go.

He wanted to kick the ass of every one of their friends, too. Most of them didn’t know who Alex was. But that knowledge didn’t stop him from wanting to knock their heads off for letting Sarah fight him. Hell, it was a good thing for Alex that Jason had been in the bathroom when it all went down. Otherwise, the police would have pulled him off Alex’s bloody, beaten corpse. He owed that asshole. Not just for the beating that had landed Sarah in the hospital, but also for the months it took to put her back together, physically and emotionally.

“What’s the code for the alarm, Sarah?” He’d never asked her what it was after showing her how to change it. He wanted her to feel completely safe from everyone when she was in the house, including him.

“Sarah?” He tilted his head back to look down at her. In the dark, he couldn’t see her blush, but assumed she had when she turned and buried her face into his chest before mumbling a reply. “I didn’t hear you, baby. Tell me again.”

She cleared her throat and took a deep breath. “I said, it’s your birthday.”

Christ, could he feel more like a dick? If he needed another clue about her feelings, he was a moron. It was a bit ironic, though.

“Wanna know a secret? My alarm is set to your birthday. Kinda funny, huh?” He set her down to dig her keys out of his pocket. “You gonna let all the cold air out, or are you coming inside?” She stood where he’d left her on the porch. Shaking herself, she followed him into the house and he reset the alarm for occupancy, locking the door behind them. “You go ahead and shower. I’ll make popcorn, grab us some beers, and see what I can find to watch.”

“Sure. Can you help me with the boots? My hands still feel all shaky.”

“Yeah, of course. Here.” He fell to the floor in front of her, sitting on his heels and dying a little more inside. This was so not how he’d pictured the night going just a couple of hours ago. He wanted to be peeling these off because she wanted him to, not because she needed him to.

She rested her hands on his shoulders and placed one foot on his thigh. He ran his hands along the supple leather, up and over her calf. He swallowed hard, tamping down his baser emotions. She didn’t need that kind of bullshit from him right now.

Slowly, he pulled the zipper down and slid the boot from her. Lips parted slightly, her breathing grew shallow and rapid. Unable to stop himself, he massaged her foot for a moment before he gently lowered it to the floor. Eyes locked, he pulled her other leg forward and repeated the procedure. Her lids fluttered, a soft moan escaping her when he gently worked his hands up her legs, kneading both calves at the same time.

“Jason…” she whispered, her hands sliding to the back of his neck.

He rose to his knees, conscience be damned. There was no denying the hunger in her eyes, or the tension filling the room. She leaned into him, his hands continuing to massage their way up the backs of her legs until they held her ass firmly. Both breathing hard, they froze, a hair’s breadth separating their lips, hesitating to cross the final line that would end their friendship and start something new.

AUTHOR BIO:
As a child, Loralynne was always the student getting in trouble for talking in class and at home for making things up. Combining her ability to go on and on and her flair for storytelling, she naturally grew up to be a writer. Originally planning to write fantasy, her muse had other plans. Once she opened herself up to the whims of her muse, she couldn’t type her first sex scene fast enough and now writes romance. Loralynne lives in Upstate New York with her husband, cats, and growing family. You can friend her on Facebook or follow her on twitter under LL_Summers