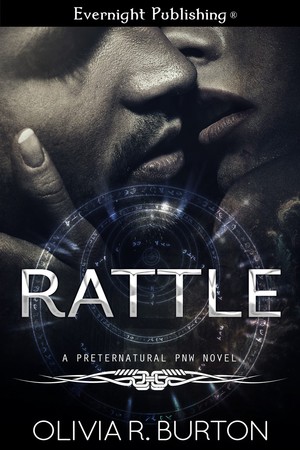 Finn’s a failure—at necromancy and life in general. “It’s not my fault,” he’d insist, looking deep into your eyes as he lifts your wallet. You’d catch him, of course. Because he’s a failure.

Veruca, on the other hand, is competence personified. She has to be, working as a Reaper directly under the Prince of Hell. When Finn shows up in a stolen sport coat and uses Veruca as cover from his murderous mistress’ glowering goons, she finds the one thing she may not be so good at: resisting Finn’s handsome face.

RATTLE hits all the best marks, delivering sex, laughs, romance, and action. Read it to follow along with Veruca and Finn as they fall in love, discover each other’s bodies, and try to save Finn from himself.

Excerpt:
Figuring he probably wasn’t getting lucky, Finn put his shirt back on before settling in at the table. Veruca was so proper, setting one of the cloth napkins she hadn’t bloodied across her lap and keeping her elbows off the table as she pulled the lid off her plate and set it aside. Without bothering with a napkin, Finn followed her lead, uncovering a massive plate of creamy pasta that pulled a growl from his belly and a low moan between his lips. Veruca laughed, gestured to the utensils wrapped and set on the table.

Finn crammed three mouthfuls in before chewing, swallowed half the food whole, and only forced himself to calm down and eat politely when he caught Veruca smiling at him as she delicately twirled angel hair around her fork. He coughed to himself, slowing his overworked jaw, and did his best to match her slow pace. His belly protested—loudly, which made Veruca giggle—but he ignored it, and forced himself to sit up and pay attention to his host.

“Why’d you help me back there?” Finn asked when his mouth was clear and Veruca had reached over to pour him some water.

“You were in trouble and I find you interesting.”

“How’d you know I wasn’t on the run from the law?”

“That man was no cop,” Veruca said, before shaking her head. “And even if you are, I’m not worried. I can take care of myself.”

“I’m not the one bleeding,” she pointed out, catching his eye.

“Point,” he agreed with a nod. He took a few more bites, mulling over what she’d said, how the evening had progressed. It was well after midnight, he was safe in the immaculate hotel room of a near stranger who had stabbed him in the ass with a steak knife, and he’d lost all his extra clothes to a goon in the sea.

It certainly wasn’t how he thought his day would end when he’d woken up fourteen hours before, but he was never one to shun adventure.

About the Author:
Olivia loves cats, action movies, and vegan candy. She won an award for her writing in high school and has been insufferable ever since. Rattle is her second novel out, so if you like what you read, check out her blog for another book set in the Preternatural Pacific Northwest!