What is it with some men and their attitudes?

Yeah, them. They might make you shiver quiver and tingle—however that level of hotness can be hard to live with. They can’t help themselves, bless them, sometimes, when they try to shield their love from all the nasties that could affect them.

And we all know how damned annoying that is. Why do they think we’re such fragile little flowers we can’t cope. Because if they think that, sometimes, we begin to think it as well…

And that’s where the problems can start…

My first book in this series, called their Wives is already out. (The Rock Star’s wife)

On 17th, The Racing Driver’s Wife is out. 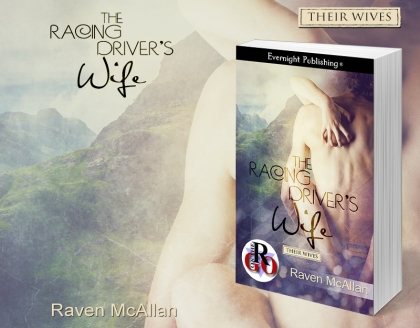 Some risks are worth taking…

Racing driver Gael Lorenzo is used to taking his life in his hands, if only he could say the same for his errant wife. He meant his wedding vows, and there will never be another woman for him, but what can he do to win her back?

Darcy thought she knew the risks of being married to a man who lives for his sport. The reality of the race track, however, proves too much for her. Nevertheless, giving Gael up entirely, is not an option either.

When circumstances force them back into each other’s company, neither one of them can let this chance go. Together they are stronger than apart, and their marriage is worth fighting for, isn’t it?

Gael Lorenzo ducked the remote control as it flew through the air in his direction, and caught it in one hand.

“How on earth you ever get from A to B when your coordination is so bad I have no conception,” he said as he walked into the room and put the control down on the table. He made sure it was well out of Darcy’s arm reach. He knew how sneaky she could be if she thought the occasion warranted it. Damned if he wasn’t more nervous then before a race. He was under no illusion that the next few moments were going to be sticky. “That was more likely to hit the window than me.”

Darcy made a sound somewhere between a scream and a snort. “Ass. You scared the living daylights out of me. And as for your one-upmanship, how on earth you lie so successfully and don’t bat an eyelid, I have no conception,” Darcy said. “‛My wife is my life’,” she parroted and rolled her eyes. “Oh yeah, that’ll be right. After your car, your team and…”

“And nothing, cara.” One-upmanship? He’d thought he was very restrained. He made no mention of open doors, lack of security, self-preservation or the like. “You believe what you will, but I speak the truth. If my wife would let it be so.” He shrugged. “Then it would be. However, she chooses to live her own life, and I have to accept that.” He winced as he became oh-so-very Italian. It was a measure of his concern and the knowledge of just how important this meeting was.

Darcy turned toward the television where the bouncy idiot he’d had to endure warbled on in her happy-clappy manner. Gael braced himself. He knew what was about to come, and he’d hoped to speak to Darcy beforehand. It seemed a tractor and trailer, and a laden log lorry who just knew they owned the road, had put paid to that. He’d spent twenty minutes breathing their fumes, before passing in a spot only the brave or foolhardy would use. It wasn’t that you couldn’t see any oncoming traffic—the road ran straight for nigh on half a mile. It was the width of the ruts and gravel that was tricky. Gael got by with no more than an inch on each side and a dozen or so scratches from the gravel where it jumped up and scored the paintwork. As it was a hire car, he guessed that his chance of a cheap rental ever again had just disappeared down the toilet.

“…and so you say this woman is lying?” The voice reverberated around the room. “In fact you’re happily married? There is a wife, but she’s not hidden away somewhere? So why isn’t she with you? Are you estranged?”

Darcy turned to him, and if he had one wish, it would be to banish the pained look in her eyes. Heaven help him, he’d done his best to avert the interview, but some ferrety reporter had discovered he was married and of course it was full bodied fodder for the gossip columns. Gael knew fine and well how his boring, no companion, race, practice, test, train and sleep regime annoyed them. Even more so because in his youth he’d kept most of them in business.

“Shh, I’m listening to what my husband has decided to say.” Darcy turned her back on him. “Even if he chooses not to say it to me. Strange, that.”

Gael spent a few seconds admiring the curve of her spine and the way a few tendrils of reddish brown hair tickled the nape of her neck before he shrugged and wandered into the kitchen. After several wrong attempts he found mugs and coffee and set the stovetop machine on the hotplate to percolate.

It was inevitable this day would come, but he wished it hadn’t been mid season, where his chances for in-depth discussion would be few and far between. Unless he could persuade Darcy to accompany him to the track, and after today there was less likelihood of that than persuading her to fly to the moon.

He was pouring the liquid into two mugs when a sound alerted him to her presence. She leaned against the doorjamb, her long legs bare and a tiny skirt and strappy top covering what needed to be covered to preserve her decency.

“What a load of cobblers you spouted. ‘My wife has a busy life and we prefer to have our time together without interruptions. Those moments are precious and I’m greedy enough not to want to share them with anyone else. Lucky for me she feels the same’.” Darcy parroted his explanation in the interview in a sarcastic tone. “Yuck, so icky-sicky. Why didn’t you just divorce me?” She held her sunglasses by one of the arms and spun them around before jamming them on her nose. “You have grounds. I left you.”

It was a pity, because Gael could no longer see her eyes to gauge her reaction to his words. “Sadly I couldn’t find any Italian coffee, but I’ve done the best I could.”

“You get whatever was on offer and lump it. I buy for myself, not for unwelcomed guests.”

He winced very theatrically, and was immediately ashamed when she coloured and looked away from him.

“Why should I divorce you? I took my vows in all faith, and intended to abide by them. I still do. In sickness and in health, in good times and bad. Etcetera. The fact we are apart does not negate my love for you. That strengthens every day. It is above everything. It’s your choice not to be with me, and I have to accede to your preference.” He took a swallow of coffee and grimaced. “It was pigs’ swill on sale, cara. You were robbed if they called it coffee. False advertising.”

“Join the real world, caro. See how the most of us live.”