Special thanks to Sandra Bunino for rallying authors together to share teases every week.

I recently received a new review from a reader for 69 Mustang, which brought it to the forefront of my mind, (and the urge to work on another hot quickie mustang driven story), once done about a dozen other outlined stories LOL
In the meantime, here’s a snippet from 69 Mustang, and Hayley’s breathlessness trying to resist her hot BFF, Rory.

© Kacey Hammell, 2015
He laughed and winked. “You’d have to be a very, very good girl.”
I’ll show you just how good I can be. Hayley pushed the thought away. For weeks she’d been having the same dream over and over. 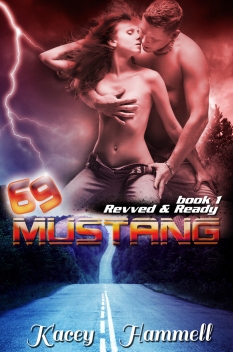 The erotic fantasies starring herself and Rory had left her breathless every time she woke, sweating and panting. It was all she thought about anymore. Images of the two of them having hot, sweaty sex—anywhere and everywhere—consumed her day and night. She trembled, flashes of heat zinging along her spine. Heart racing, she drew in a deep breath.
He captivated her in so many new ways these days. His kindness had always been there, but lately, she’d smile if mentioned helping an elderly lady get her groceries to the car. And the way he talked about himself, she got upset and angry. He complained about being a ginger, especially in the summer when he burned easily, but she loved his unique looks. Kind of geeky and studious mixed with sexiness and cute buoyancy he didn’t realize he possessed. She disliked hearing him put himself down.
How were any of her new reactions possible? They’d been best friends forever, and had shared all their secrets with one another.
Maybe the intense and potent way he looked at her now. At times when she’d glance at him, she’d catch darkness and smoldering heat in his eyes that made it difficult to breathe. Was it because she’d slimmed down over the last eight or nine months. She didn’t want to think about him like that, knew deep down that he wasn’t that shallow. But he had been giving her the eye lately, passion-filled stolen glances. Since then, the air around them had shifted.
He hadn’t hidden his reaction to her tonight when he’d picked her up for his parents’ anniversary party either. Rory’s normally soft hazel eyes had turned a golden rich hue, and when she walked out of her bedroom, he’d let his gaze roam over her body. She knew she looked great in the bright blue satin, off-one-shoulder, mid-thigh gown that really made the azure in her eyes pop. Perhaps he agreed. His breath had hitched, his hands shook as he’d helped her with her shrug. His touch had lingered on her shoulders longer than needed. The warmth from his palms scalded against her already hot skin. He’d stood inches behind her, smoothing his hands down her back, and electricity tingled through her body, filling her with sudden fervor and desperation to feel his embrace. And make some of those naughty dreams she’d been having come true.
“You’ll be what, thirty-seven in a couple months, Hales? Maybe we should plan a cruise or something awesome for your fortieth? You’d look amazing in a skimpy bikini you know. Maybe a nude beach?”
The sound of Rory’s voice pulled her from her thoughts. She gulped and cleared her dry throat. “Um, yeah. Sure.” The air in the vehicle was nearly smothering.

Still FREE at all book outlets

Available at …
Amazon — US / Canada / UK
Smashwords
aRe
B&N
Kobo