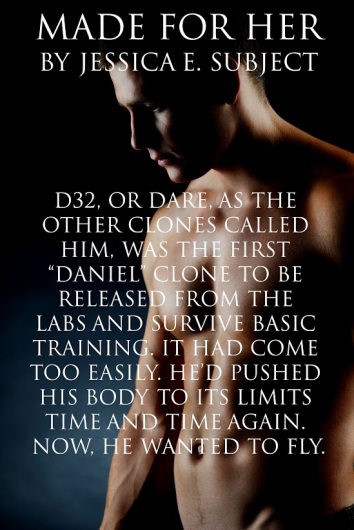 Today the Spotlight shines on Jessica E. Subject. Jessica’s latest release, MADE FOR HER is now available! 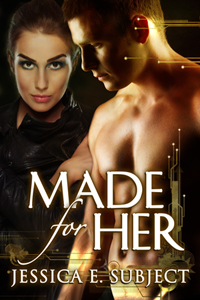 MADE FOR HER  By Jessica E. Subject

After terrorists murder the love of her life, Colonel Mikayla Jones trains squadron after squadron of the clones he brought to life, to take to the skies. When she discovers a young clone of her husband in her newest class, her world spins out of control. How can she command the look-a-like when she can’t help but yearn for him to fill an ache in her heart?

Dare was created to be the best. As the first Daniel clone to leave Onatria labs, he needs to prove he is more than just a DNA copy. To do that, he must rely on the wife of the man who donated his genes. But when she refuses to train him, Dare faces discharge and returning to the labs. Can he convince Colonel Jones to finish his training and find a way into her bed? Or will long kept secrets unhinge the entire clone project?

Please note: Made For Her was previously published with another publisher. It has been revised and expanded from the original version. This version also includes the short story, Replicated Consequences, which takes place in the same world.

Dare rolled off his cot then left the barracks, his body sore from the last few weeks of hell. Major Thompson had sent them right from the classroom to physical training, as if they were still in basic. When they ran flight simulations, Thompson assigned him the first officer’s seat rather than the captain’s. The only time Dare had the chance to fly as captain, he’d fucked up the take-off and crashed the simulated plane. Not an ideal way to start, but he required more practice. His squadron only had two weeks left before their first flight, and he felt no more ready to fly a plane than he had a month ago. He’d studied his flight manuals every night, but they did not compare to practical experience. Somehow, some way, he had to convince Colonel Jones to come back and train him. He needed to be prepared.

He walked up to the colonel’s house and knocked on the door. Waiting for her to answer, Dare noticed his foot tapping. When had he started that habit?

“D32, what are you doing on my doorstep? I told you never to come back.”

He spun around to see her standing at the end of the path leading to her house, another man only a few steps behind her. The major. An unexpected, gut-wrenching anger filled him, making his blood boil.

“Go home now, Thompson,” she said. “You are wasting your time.”

The man leaned forward as if to kiss her, but she stepped to the side. Dare held in the urge to punch him. Violence wouldn’t win him any points with the woman whose help he needed.

Thompson turned toward him, his gaze ready to kill. “And yet there is a cadet on your doorstep.”

She placed a hand on the major’s chest. “He’s wasting his time, too. But he’s my problem to deal with.”

Colonel Jones grimaced as Thompson stormed away, before advancing toward her house and Dare. “Lieutenant, are we going to have a problem here or are you going to leave now?”

Dare put his hands up. “I have no problems. I just want to know why you left when you first saw me; why you never came back.”

“I told you, I was reassigned, though it’s none of your business.”

“Oh, really? I think it is my business since you asked to be reassigned.” He shouldn’t have said that. It was information he’d overheard from a private conversation. But he was on a roll. “It was because of me, right? You hate slugs, and you can’t stand the fact that one of us may look like your husband.”

She glared at him, but he kept going. He had to know. “You hate the idea of training me. You hate me.”

Her bottom lip trembled. “I don’t hate you.”

Gods, what had he done? Was she going to…cry? He’d never seen any of his commanding officers show any sign of emotion other than anger. But he couldn’t help himself. “Why, then?”

“Because you weaken me.” She slipped by him and tried to unlock her door.

“I weaken you? I’m afraid I don’t understand.”

She fumbled as she tried to insert the key chip. Then she turned toward him. “You’re exactly like Daniel. Your mannerisms, your voice, and that annoying foot tap when you’re impatient. I can’t concentrate when I’m around you. I can’t be strong, be a leader.”

She opened the door, but Dare made sure she couldn’t close it. He used his body as an obstruction.

She gasped. “You can’t come in. Leave me alone.”

He pushed the door open, surprised she hadn’t yet reminded him of his rank. “I can help you be strong.”

Her gaze met his, and he shuddered at the vulnerability in her eyes. “I….”

“I need you to train me.” He longed to touch her, imagined the soft ply of her skin as he ran the tips of his fingers across every inch. Pulling her toward him crossed his mind, but he needed her training more than her body. “I’ve only run one simulation as captain.”

She reeled back, probably for the best. “What? You should be running at least one every day.”

“I know. That’s why I’m here.” He yearned to hold her, to feel her breath on his skin. Thank goodness she hadn’t looked down. She wouldn’t appreciate the salute he had for her.

“I can’t believe Major Thompson is being such an ass. Actually, yes I can. I’ll talk to General Madison tonight. You’ll be back in the simulators tomorrow, as captain.” She turned and stomped away. Had she dismissed him?

“Wait…please, Colonel Jones. I need more practice than that. I need to be the best.”

Her hard eyes and pursed lips gave him a jolt when she turned back toward him. “I’ll see that the general allows you some extra practice time.”

“…a brilliant plot twist that was a tear-jerker, and had me physically reeling – I really hadn’t expected it.” – Critique de Book

“The entire thing was cohesive; the characters, dialogue, and setting were natural and well paced. Very glad I went with my initial instinct I read it…Highly Recommended!” – Books, Books & More Books

“I loved this twist on the Sci-Fi clone story… This was like a Top Gun story set in the future where cloning is real and space exploration is growing and alien contact is a reality for which the government has been preparing for years.” – Tracy Riva Books & Reviews

Jessica E. Subject is the author of science fiction romance, mostly alien romances, ranging from sweet to super-hot. Sometimes she dabbles in paranormal and contemporary as well, bringing to life a wide variety of characters. In her stories, you could not only meet a sexy alien or two, but also clones and androids. You may be transported to a dystopian world where rebels are fighting to live and love, or to another planet for a romantic rendezvous.

Jessica lives in Ontario, Canada with her husband and two energetic children. And she loves to hear from her readers. You can find her at jessicasubject.com and on twitter @jsubject.

One thought on “Spotlight ~ Made For Her by Jessica E. Subject ~ #TopTenList #sfromance #newrelease #military #futuristic @JSubject”