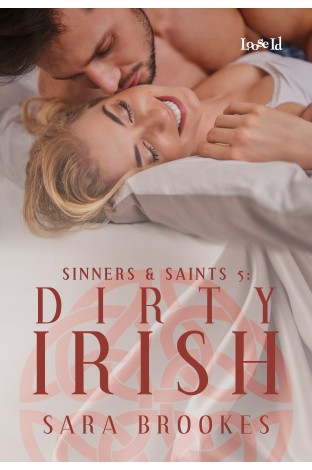 He refuses to be owned. She won’t settle for anything less…

McKinley swore he would never give up control again. But his reclusive existence has eroded his soul so much, there is nothing left but his need for the only woman he ever loved. Back on familiar soil for a St. Patrick’s Day ride with his Riding Irish brothers, McKinley seeks to repair the one relationship he is convinced will cure him of his relentless cravings. This time their reckless games won’t break him.

In the secret dungeon at the clubhouse, memories of their wild past rouse sinfully dirty thoughts. Then one fateful moment leaves two rival clubs in an all-out war where Natalie and McKinley are in the crosshairs. They could end up losing everything—including each other. 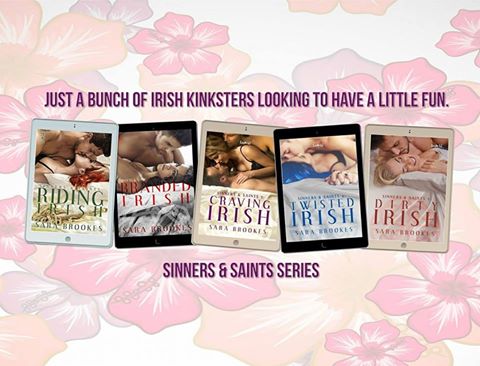 Thousands of things she wanted to say danced on her tongue. Instead of unleashing them, she bit each one back, smiled, and sidestepped him without a word. The burn of those unspoken words made her eyes water.

McKinley had once been hers. Utterly and completely. She buried those memories as well as she set the tray on the table along with the assortment of other finger foods she’d transported from the hotel.

This was her vacation. Yeah, it was only to the other side of the island, but to her it was another world. A few days away from the hustle and bustle of Waikiki tourism. As hard as she’d been working, she desperately needed the break. And then he’d strutted in. Thrown her world into chaos with that slight, almost smile that made her knees shake and her heart lurch.

When she finally worked up the courage to turn around, she saw McKinley stroking the ring of condensation puddling around the bottom of his glass as he stood next to Isla. The movement drew her attention to his hands. His fingers. She’d adored those hands once. Strong enough to hold her in place over his straining erection for however long she’d ordered. Yet patient enough to build her up to the gentlest, most fulfilling orgasm while she denied him.

McKinley’s confident stance filled the space around him. He wasn’t a small man by any means, but he possessed a unique kind of beauty rarely seen with a solid frame better suited for a man twice his size. He also had a rare knack for making his presence known, yet ensuring he was still approachable. She knew what it felt like to have those ropes of hard flesh yield to her command. He’d been an enticing display of a man on his knees. Desperation shining through those gorgeous, multicolored blue eyes. All that aggressive manliness restrained for her, and her alone.

“Natalie.” Her name uttered with buttery softness brought to life every dark fantasy she’d quelled. His voice. God, that decadent voice. Filled with velvet tones that made him sound like he was balls-deep in a woman. Though it was even and level, she noted the hints of strain. He stayed a good ten feet away from her, hands shoved deep in the pockets of his cargo pants.

When had he crossed the room?

Though she saw no sign of nerves, she knew him well enough—intimately enough—to tell he was slightly off kilter finding her at the clubhouse.

“McKinley.” She kept her tone crisp despite her shortened breath and the crazy things taking shape in her body. He’d walked away from what they’d had just as things had started to get interesting. No phone call. No text. Nothing but a silent “fuck you” she still felt the sting of even after all this time.

She wanted him to clasp his hands. Go to his knees. Request permission to speak. But if what she suspected was true, none of the Riding Irish membership knew of McKinley’s preference to submit. Damn it. She was supposed to be done with everything their short, tumultuous relationship represented. Especially when she’d learned after the fact that he’d been on Oahu last year for the annual ride and hadn’t contacted her.

The desire to know what he’d been up to overrode her judgment. She’d regret it in a few days. But she hadn’t lived her life avoiding things she felt badly about later. Too many brushes with death had already taught her time was fleeting. “How have you been?”

Which was a hell of a lot better than she could claim. She bit her tongue. Again. “Same here.” She didn’t offer more because she didn’t owe him a damn thing. Five minutes ago, she’d been ready to enjoy a few days off for the St. Patrick’s Day festivities the club had planned. But that had all changed when her past reached out and grabbed her by the throat.

He tapped the rim of his tattered baseball hat, shifting the dark hair brushing his shoulders as he flashed her a half smile. She masked her gut reaction to reach forward and brush away the strands that feathered across his brow. Everything about this powerful man was pure, sweet temptation.

“Can we go talk in private?” He dropped his gaze away from hers. Not quick enough for her to miss the frown. It had cost him to ask.

Silence stretched out. She’d wait him out as long as necessary. Hell, she’d waited around this long. Waited for Danny to pull his dick out of his ass and smarten up about serving his time.

Natalie Conklin was the queen of patience.

McKinley cleared his throat. “I really would like to speak with you alone.”

There. The slightest strain edged his words. “No.”

His head shot up, an instant flare of anger and confusion flashing through his eyes. McKinley wasn’t a man who handled rejection well. She’d toyed with that particular character trait plenty. Especially when she’d realized how much he disliked being told he wasn’t going to get his way.

“Please, Natalie.” His voice lowered, showing the shards of need stabbing at him.

Fuck you, Grant McKinley. She clamped her mouth shut. Dug her nails into her palms. Used the pain to focus her resolve. She would hold firm. She had to because she knew this man had the power to break her.

“You don’t want to talk. You want me to take away reason and logic. Make you feel something again. Just like last time.” She had no responsibility to him. “You want me to strip you of accountability. To take away your ability to choose. To hate-fuck you.” His eyes flashed with heat. Yeah, there’s the truth, you bastard. “But that was your mistake when you chose your male ego over me.”

“You have that low of an opinion about me?”

“Considering the last thing I saw was your bare ass as you walked out on me two years ago—yeah, I’d say that’s exactly what my opinion is.”

He stepped into her so she was forced to angle her face up to look at him. The peppery scent of his aftershave played havoc on her thoughts. On her resolve to stand firm. Emotions permeated the stagnant air, acrid and brittle like spent gunpowder. He was guarded. More than she’d ever seen before. Yet he was also exposed. “I can’t change what I did that day, Natalie. But that doesn’t mean I’m like other men.”

No, you’re certainly not. McKinley was a former Marine who handled explosives during his time in service. As a civilian, he’d rushed into burning buildings. He rode a motorcycle. Liked rough sex. McKinley was a man who wasn’t afraid of danger. And she gravitated right to him.

“I’m not a naive woman. Not like I used to be. Flash that charming smile. Flutter those baby blues. Insist you need to talk to me all day long. It worked once. Got you what you wanted. It won’t happen again.” Her quick descent, guided by his more than capable charms, had already dragged her down once.

He scowled, drawing his eyebrows together. “I know. I don’t deserve—“

“That’s right, you don’t. Good luck during the poker run.” She breezed through the doorway and out into the Hawaiian sunshine. She had her keys in her hand before she made it to the parking lot.

Her plan had been to party it up in the days preceding the ride, then wait at the club with all the other families while the riders made the required stops for the run on Friday. To celebrate their return in traditional Irish fashion. But she couldn’t. Not knowing McKinley was back on the island.

For months, she’d imagined how they’d react when they saw each other. In her mind’s eye, everything had been proper and respectable. He’d kiss her cheek, then go to one knee. Perhaps both. Cross his arms behind his back while he apologized. Profess his undying love for her.

What a load of fuckery.

About Sara:
Sara Brookes has always been fascinated by the strange, the unusual, the twisted and the lost (tortured heroes are her personal favorite). She is an action movie junkie, addicted to coffee and has been known to stay up until the wee hours of the morning playing RPG video games. Despite all this geekiness, she is a romantic at heart and is always a sucker for an excellent love story.

Sara is a PAN-level member of RWA and the Fantasy, Futuristic and Paranormal & the Virginia Romance Writers chapters of RWA.