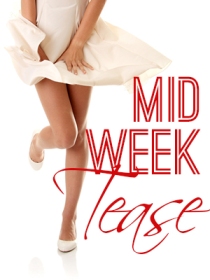 Happy Wednesday Friends! I hope everyone is doing fabulous!

This week’s tease comes from STIRRING UP DIRTY, book 1 of “Stirred by Love” series. Things are not easy between Eric and Candy. She’s fed up with him, he’s being stubborn…

“What are you doing here, Eric?” Arms folded under her lovely breasts, she stood, chin raised as she blocked the door. Her eyes burned with irritation.

He deserved her scorn after the way they’d left things last night. “I just wanted to apologize for last night. I acted like an ass.”

“Tell me something I don’t already know.”

Swallowing hard, he clenched his fists. “Look, I am sorry. I shouldn’t have let things get so out of hand. But once I got started, and you were so hot in my—” He glanced around him. “Can we take this inside?”

Candy glared at him for a few seconds, then sighed and took a step back. He entered and she closed the door firmly behind him. 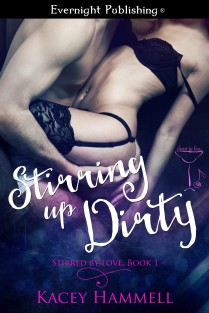 “You have ten minutes. I have things to do. Have a seat.”

He sat in the chair by the small desk in the sitting area. “As I was saying, I am sorry.”

“Yes.” She sat at the end of the sofa across from him. “You said that. There’s nothing to apologize for. We were both there.” The ire in her eyes pinned him in place. “But that doesn’t excuse your callous words. You were a shit.”

The woman didn’t mince words. He liked that about her.

“I know. I shouldn’t have said those things. But you have to give me a bit of leniency. What am I to think? I know you want to take Melissa all over the world and I have a feeling you’ll do anything to make that happen.”

Candy threw up her arms, obviously frustrated. He was sure he heard an animalistic sound come from her as she stood and began pacing.

“Of course I would. I believe in everything your sister is, and all that she can accomplish. You should, too. But I would never use myself in such a fashion to do it. I am a professional and have too much integrity to do that. And you know dick about me if you really think I’d use you like that, or embarrass myself. Hell, it would be offending Melissa, too. God, your ego is out of control.” Her cheeks were flushed, he’d guess in frustration. He found it endearing.

The long skirt fluttered the more she paced back and forth. Her ass and flat belly looked incredibly hot. And the way the halter top hugged her firm breasts… His mouth watered. Images of her coming last night filled his head. His dick hardened remembering her wild cries of pleasure.

Shaking his head, he adjusted in his seat and tried to focus on the task at hand. “You’re right.”

Eric sighed. She was quick with her comebacks. He’d probably never win against her. At least not this morning.

“I mean, you’re right. I don’t know dick about you. And there’s probably going to be little time to make that happen. We both lead hectic lives, it seems. Plus you’ll be gone and back to your world soon. But you won’t take Melissa with you.”

Candy snorted and stormed toward him. “You need to get it in your thick skull that she’s an adult, Eric.” She rubbed her palms together. “She’s serious about this. Sticking her in a courtroom is not going to make her happy. And she already has me putting out feelers for work this month. She probably already has her bags packed.”

Christ. He thought Melissa wanted to discuss things first, not come home just to leave again. Probably for good. He clenched his teeth, anger rising. He needed to keep her close.

She is an adult, old man.

He shook off the little voice in his head. It didn’t matter. He had to convince his little sister that following the lawyer path was the right one.

Thanks for stopping by!

9 thoughts on “#MidWeekTease ~ “Your ego is out of control.” #StirringUpDirty #StirredbyLoveSeries”