Today we welcome one of my fellow Evernight Publishing authors, Elyzabeth M. Valey.
Get ready for one awesome excerpt!!
Welcome Elyzabeth!
Can you tell us something quirky about yourself that readers might not know already?
I love Disney! Before checking the rest of the channels on TV I always see what they’re showing on Disney Channel first. Phineas and Ferb is one of my current favorite shows.
What would we find you doing on a quiet Friday night at home (aside from writing)?
Aside from writing, you’d find me watching a film or a series (How I met your mother and Dr. Who are old favorites and I just started on The Newsroom).
What did you want to be when you grew up?
It might sound cliché but I always wanted to be a writer and when I turned 8, I wanted to be a journalist.
What do you like to do for fun and relax?
I enjoy going out with friends for tapas and walking my dog. A lot of my ideas have developed while out on a walk with my lab.
Where do you reside? If I was to come visit you for vacation, what one landmark is a MUST see that you’d take me to?
I live in Madrid, Spain. Only one? Madrid has loads of places that should be seen, but I guess the Plaza Mayor is a must. The origins of the plaza go back to 1576 and it’s been home to an assortment of activities. Christmas is a fun time to visit because it has stalls with a variety of objects that range from classical nativity scenes figures to funny prank and gag toys.
Now, about your story, THE GOLDEN COCK. A heck of a title by the way!! What can you tell us about it?
The Golden Cock is a naughty fairy tale, loosely based on the story of The Golden Goose. It’s the story of a Vincent, a good man that after being subject to the cruelty and ridicule of his brothers receives a kind of compensation that will change his life forever. His counterpart is “Ice duchess” Brielle, a woman that has never achieved orgasm.
Did you second-guess yourself at all when coming up with the title?
Nope, strangely enough, (because it’s usually not the case) one of the things I had clear from the start was the title of the book.
What influenced the idea for this story?
I was doing some cleaning and found an old drama script of when I was in middle school of The Golden Goose. The wheels in my head started turning…
What was the most difficult to thing/scene to write in this story?
The mirror scene. I had to go back to it several times.
Which character was the most difficult to work with – the hero or heroine?
The heroine, Brielle. She’s the daughter of a duke and appears to be strong and confident but she’s not.
What makes this couple perfect for one another?
Besides the sexual chemistry between them, they’re both incredibly sweet and good people. They share many of the same interests and complement each other: where Brielle is impatient Vincent is patient, where he’s forgetful, she’s detailed, where’s he’s compliant, she’s stubborn.
Did the story turn out the way you planned from the beginning? If not, what change happened that you didn’t expect?
No, it didn’t. Initially, it was going to be set in medieval times, but then Brielle appeared and she didn’t fit the era. So I had to go back and rewrite everything.
What do you hope readers take with them after they’ve read this story?
First of all, I hope they enjoy the story! But there’s also a message in the story about self-confidence and how important it is to believe in ourselves.
Fast & Fun:
Boxers or briefs? Boxer briefs!
Silk or satin? Silk
Joe Manganiello or Channing Tatum? Joe Manganiello ❤
True Blood or Game of Thrones? Both? But if I have to pick Game of Thrones.
Wine or beer? Beer
Chocolate or Vanilla? Chocolate
Favorite Food? Spaghetti
Heels or running shoes? Running shoes.
Baseball or hockey? *cough your host is a HUGE hockey fan – just saying *g** LOL Hockey (but not because I’ve been coerced into picking it, I swear! I know little about the sport but I have a fondness for it since we sometimes had to play at school during gym class and I took the opportunity to hit the bullies with the stick.)
Coffee or Tea? Coffee with milk and two spoonfuls of sugar, please. *the host agrees w/ those ingredients! *g**
Camping or Hotel? Hotel
What place to travel is on your Bucket List? Finland!
Was it love at first sight for you when you met your spouse? I’m a single lady! *now I have Beyonce in my head!!*
Where can readers contact you?
Facebook
Twitter
Goodreads
Blog: www.inadreambeyond.blogspot.com
Website: www.elyzabethmvaley.weebly.com
Email: elyzabethmvaley@gmail.com
Thank you very much for being here. We all wish you the best of luck!!
THE GOLDEN COCK (NAUGHTY FAIRY TALE) 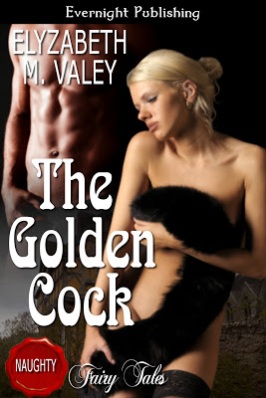 Kind-hearted Vincent Stowe spent years with an inferiority complex until, one day, after accepting to help an older woman with an odd request he receives a life-changing gift.

“Ice Duchess” Brielle is desperate for a solution to her inability to orgasm, so when word about a man with a magical cock reaches her ears, she decides that he just might be what she needs.

Will Vincent’s “Golden Cock” be enough for the “Ice Duchess”, or will something else come to play along the way?

Be Warned: multiple partners, MFM, FFM, m/m sex, f/f sex
Available at:
Evernight Publishing
Amazon.com
Amazon.uk
All Romance Ebooks
Bookstrand
And more!
I love hearing from readers! Keep in touch with me at any or all of these places:
Facebook
Twitter
Goodreads
Blog: www.inadreambeyond.blogspot.com
Website: www.elyzabethmvaley.weebly.com
Excerpt:
“Turn around.” His voice was gruff, his need evident to his ears. Could she hear it too?
His fingers rested for a fraction of a second against the nape of her neck. She froze. Skimming his digits over her shoulders and down her back, the corner of his lips lifted as he heard her exhale heavily. Skillfully, he worked the clasps of her corset and tossed the material on the bed. Wandering back to the mirror, he continued to adjust it. He needed to distance himself from her before succumbing to the temptation she was.
When he looked up again, she had removed her chemise. Pale, perfect skin gleamed under the dancing candle light. Terse breasts with large pink nipples waved hello and a honey-colored thatch called him to come closer and explore. He swallowed dryly. His balls felt heavy and his cock was stiff as a rod. This was going to be much harder than he thought.
“Lie on the bed, lean back on your elbows and keep your legs open.” His voice came out husky and low and he cleared it loudly. Brie nodded and obeyed without a word.
“Can you see your pussy?” he asked, moving the mirror.
She shook her head. “No,” she croaked.
Vincent bit his lip, unsure how to proceed. He needed to prop her up on something so she could gather a better view of her sex. By her words, he had the distinct feeling that Brie was never excited enough when she took men into her chamber. She needed to see how wet and desirable her pussy became when it was really ready to be plundered and she needed to experience her own touch. He swallowed hard as an idea occurred to him.
“Here.” Placing the mirror in a slight angle, he climbed up in bed with her. Spreading his legs around her, he sat so that her back was resting against his chest and her ass was resting between his thighs.
“Open up,” he whispered into her ear. Nodding, she spread her legs. Vincent clenched his fists at his side. He wanted to touch her, to feel that soft skin underneath his fingertips, to taste every inch of that delectable morsel.
“Can you see now?”
“Yes.”
He took in a deep breath. Darn, she smelled good. Clean, like lilacs. She wriggled and her hair tickled his nose, the skin of her thigh rubbing against his leg and making his dick throb with unspent desire.
“What do you see?”
“Hair,” she murmured. He felt her swallow and tremble slightly. Oh, how he wanted to wrap himself around her. No, Vincent.
“Use your hands and open yourself wider.”
“What?” She tilted her head to look at him, her expression confused.
Unable to hold back, Vincent brushed his lips over hers. A current of sorts zinged over his lips at the contact.
“Okay,” he said. “Let’s start slower. Caress your thighs, up and down. That’s right.”
He watched carefully as Brie rubbed her fingertips over her skin, coming closer to her quim at every upward stroke. Vincent closed his eyes. The view was the most erotic thing he’d ever experienced. His cock wept, hidden underneath his robe, and pressed to her back. “Gently, pass your hand over your pussy.”
He felt her breath hitch as her mouth fell open in shock. However, she did not deny him but simply followed his command with a dry swallow. His Adam’s apple bobbed as she ran her hand over her damp thatch.
“Do it again,” he whispered. “Only this time, allow your fingers to touch more of that area,” he urged, his own breath coming out in a rasp.
He briefly glanced at his reflection in the mirror. His hair was disheveled, his face flushed. He wanted to buck his hips but he kept steady, giving Brie the opportunity she’d probably been denied all her life: to find her own release. Her hands found her vagina again, but this time she didn’t skim over the curly hairs, but parted them and explored the sticky wetness in between. Had he been standing further away he would have missed it, but pressed behind her, her moan was like a punch to his stomach, feeding the flame of his passion. Vincent closed his eyes, swallowing the groan in his throat and willing himself to relax.
“Again,” he said without opening his eyes.
She repeated the movement, but just as she was about to slide her fingers down to her thighs, he grabbed her hand with his left. Spreading her fingers, he forced her to delve deeper and slide the digits over the fold and curls of her pussy, spreading the wet dew lingering there.
“Vincent,” she whispered his name, her head falling against his shoulder, her body tensing slightly as he led her fingers to caress and touch her vulva repeatedly. Her wet moisture spread from her fingers to his, coating them. He groaned loudly.
“Don’t stop.” Pulling back, he brought his fingertips to his mouth and licked off the sweet honey. Their eyes met briefly in the mirror, desire clashing against desire.
Author Bio:
Defined as weird since she was about eight, Elyzabeth honors the title by making up songs about her chores, doodling stars and flowers on any blank sheet of paper and talking to her dog whenever he feigns interest.
Losing the battle to the voices in her head is her favorite pastime after annoying her younger sister with her singing. Writing stories full of passion and emotion where love conquers all is her happy pill and she’ll forgo sleep to make her readers live the dream.