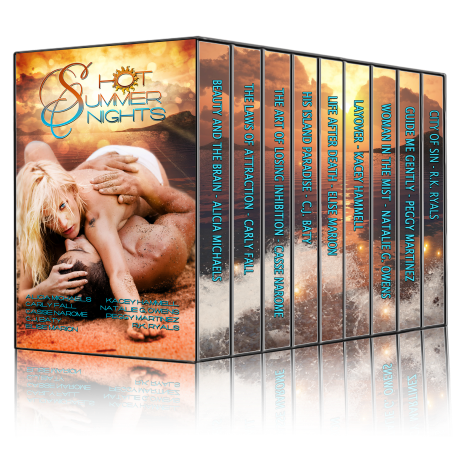 Beauty and the Brain by Alicia Michaels (New Adult Contemporary Romance)
Chloe Sanders would rather be anywhere than on vacation with her parents. It’s not like they ever pay any attention to her, and being a witness to their constant fighting and boozing isn’t exactly her idea of fun. Still, when they drag her along on a trip to the Elysium Resort for a week, Chloe is determined to have a good time—knock back some drinks, spend all her spare time shopping or at the spa, and maybe even in the arms of a hot surfer. She certainly doesn’t count on Chase, who’s roughing it in the rainforest with a research group, studying wildlife. He’s an annoying know-it-all, and not shy about letting Chloe know what he thinks of her bratty ways and expensive lifestyle. The two couldn’t be more different, but in the swelter and mystery of the island, opposites just might attract.

The Laws of Attraction by Carly Fall (Contemporary Romance)
High-end criminal attorney, Jared Greer, has spent his adult life working for his father’s legal firm and chasing the next big client. The legal world is shades of gray, and he doesn’t think about right and wrong when representing a client—he thinks of the paycheck. His hard work has paid off, and he lives a lavish lifestyle filled with expensive cars, a luxury apartment, and the best of everything.

He takes a private jet to Dasia Island for a meeting about possible representation with a CEO of a toy company accused of knowingly producing toys that killed 15 children. As Jared and his assistant, Monica, work through the case documents and share some of what Dasia has to offer, their passion on the magical island makes Jared consider the way he lives his life, especially if he wants Monica in it.

The Art of Losing Inhibition by Casse NaRome (Contemporary F/F Romance)
One man’s trash is another woman’s treasure.
Reeling from the loss of her husband to a carefree socialite, uptight Kennedy retreats to Dasia Island for a little bit of R and R. Will she learn to let loose in the arms of Basil, the wild-child trust-fund baby with a silver tongue?

His Island Paradise by C.J. Baty (Contemporary M/M Romance)
Gar Lancaster wasn’t depressed, no matter what his sister said. He didn’t need a trip to a tropical island to meet some guy for a vacation romance. But when Mike Peters kissed him on the balcony under a sea of stars with the pounding waves hitting the shore below them, things changed.

Maybe, he didn’t need a happily ever after. Maybe happily for right now would be okay. Whatever happened, Gar was pretty sure he was in way over his head.

Life After Death by Elise Marion (Contemporary Romance)
When his friends invite him for a guys’-only vacation to the exotic Dasia Island, the last thing Jameson Blake expects is to run into Victoria, his ex-wife. The loss of their son in a tragic accident left their marriage in tatters, and together they were never able to move past it. But in the wilds of the rainforest, revelations will rock them both, forcing them to confront their past. In the process, the realization that love has never died between them will rise to the surface. With that knowledge, will Jameson and Victoria be able to overcome the past and strive for a future together?

Layover by Kacey Hammell (Contemporary Romance)
Hand’s off. That’s Gemma Sands’ cardinal rule when it comes to dating co-workers. Even though she’d like to get her hands on Michael Harmon.

Michael has his own idea about where he’d like to put his hands. But Gemma’s steadfast rule means Michael simply admires from afar.

But fate has other ideas when an unexpected layover on Dasia Island pairs the couple in less than ideal conditions. Forced to share tight quarters, and unable to resist their passion, they finally surrender to every touch they need so desperately.

Woman in the Mist by Natalie G. Owens (Paranormal Time Travel Romance)
A free spirit and sole heir of the 5-star Euthykhia Hotel, Garrick Kaili ‘Kai’ Langston remains on Dasia Island out of loyalty to his family. But this sprawling, recently renovated building, originally built in the thriving period between the two major world wars, harbors some dark secrets. Unsolved mysteries that continue to haunt at least one of its oldest residents…

A man shot to death, his murderer never found…and a young woman disappearing into thin air on the same night in 1965. A curse, or simple foul play? Some say Poppy Drummond’s fate was to be swallowed by deadly mists near the ruins of Dasia. Others claim such notions are merely fruit of the meanderings of a crazy mind…

But Kai is just about to find out—the truth is never what it seems…when the walls between fantasy and reality come crumbling down.

City of Sin by R.K. Ryals (New Adult Contemporary/Paranormal Romance)
On the Island of Dasia, there’s a legend about a city of sin, a tragic story that ended in a mist of death. Haven Ambrose is a Journalism major on a mission. River Brayden is a meteorologist with a tropical system to follow. Their love is strong, but is it strong enough to survive a storm that leaves them stranded them with an ancient evil?