Special thanks to Sandra Bunino for rallying authors together to share teases every week.

This week’s tease comes from STIRRING UP DIRTY, book 1 of “Stirred by Love” series — and connected to DARE — recently contracted and coming soon with Evernight Publishing.

This is a scene that made me chuckled for a bit while writing. Some details came out of nowhere, and just seemed to fit.

Here, Eric has just returned home from having a few drinks, his sister invited Candy to stay the night because of a project they’d been working on, and Eric is only too happy to find her. And again, the chemistry between the two characters smolders.

And let’s see if anyone recognizes a certain book/story mentioned, which are some details that just worked their way in and stuck.  *g*

© Kacey Hammell, 2015
“Get out of here, Eric. I watched you get out of the truck. You’ve had too much to drink.”
He advanced toward her. She inched back higher against the headboard. Those frickin’ tingles along every inch of her body were back again. The last thing she needed was for him to get too close. Fighting every urge to jump on him, she concentrated on her breathing, and the frustration he caused.
“I only had three before coming home. I’m not so tanked I don’t know what I’m doing.” He looked around at the papers still on the bed. “What are you doing?”
“Working.”
“At this hour? Do you never give it a rest?”
She scooped up the top folder and slapped it on top of her tablet. Kicking her legs free from their folded position, she pushed at his legs with her feet. “Get off. Go to bed. I’m tired.” 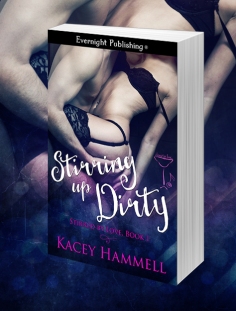 He snatched the last folder, then froze.
Candy’s breath caught in her throat. Oh, darn it all to hell.
So she hadn’t worked all night. She’d gone to bed with one of her favorite past times. A good book to settle in with and relax until sleep claimed her.
But the particular book in her briefcase was one she kept tucked away in the privacy of her bedroom. The cover, intoxicatingly gorgeous and sexy, with the lone male on the front dressed in fatigues, and his uniform shirt open to reveal a perfectly sculpted chest and hot abs. The man was a god among men. The fantasy of each woman worldwide who would appreciate the male form from head to toe, and loved hard muscle to grab hold of.
“Give me that.”
“What the hell is this? Uniform Fetish? A new version of Playboy?”
She reached out for the book but he moved back and held it above his head. She dropped her arms, frustrated. “No, you moron. It’s a book. You know with words inside. Have you ever read one?”
He glared at her, then to her mortification, opened it to a random page. His eyes widened.
Her cheeks burned. Shit. So she enjoyed a hot erotic romance book now and again. She wouldn’t admit that she read more than four a month, even with her schedule. Getting lost in a hot fantasy at the end of a hectic day was heaven. She’d been a fan of the genre for over a decade, long before most people cared to admit it existed.
“Jesus. The dude, Miles is going down on her, eating her pussy like there’s no tomorrow. And she loves it.” Eric read further, his facial features almost making her laugh. He was humored by it, probably even a bit enamored but he’d never admit it.
“Is this what women read to get turned on?”
She shrugged. “Hell if I know. I’m not every woman.”
“No, but you’re the only one here who’s been reading this…what the hell do I call it…filth?”
Charging on to her knees, she snatched the book from his palms. “Of course not. You have no understanding about it. Have you ever written a book? Don’t call it what it isn’t. Erotic romances are meant to titillate and seduce the reader. If you must know, I enjoy the journey of the characters, the self-discovery about themselves and the desires to fulfill every fantasy.”
She tossed the book on the night table and waved her hands toward him. “You can go now. I’m done explaining a good book to you.”
“Don’t be defensive. I’m curious. I mean, reading about sex…” He lifted his grey eyes, and they latched onto hers. “Does it turn you on?”
Warmth washed over her. She wanted to kick the light covers off her legs and let the air cool her off. But the intense flames shooting from his eyes held her captive. Trembling, she drew on the strength to steady her breathing. When he moved closer, pulling the sheet away from her legs, and wrapping a hand around each of her ankles, her plan was shot to hell.

5 thoughts on “Mid Week Tease: “Her plan was shot to hell.” #MWTease”