Hello everyone! I’m author Rose Wulf and I’m here today to tell you all about my latest release, Found in Flames! Found in Flames is Book 1.5 in my Night Shadows series, which is set in a world full of vampires, werewolves, witches, and humans called Slayers. This installment focuses on the powerful, sexy Luka Craige – Alpha werewolf with a mission – and unassuming, overworked Joella Harp – a human caught in the crossfire. 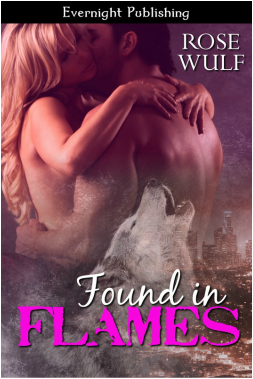 All his life Luka Craige has been haunted by the witch that killed his family. Finally, having chased him across the country to the edge of vampire territory, Luka has his chance at vengeance. But not before his Beta is killed and Luka finds himself protecting a woman he doesn’t know. A woman who arouses him like never before. Could he possibly exact his revenge and find his mate?

A burning body was the last thing Joella Harp expected to find when she rounded the corner. Let alone a body with a man standing over it. After that her droll life becomes a whirlwind of werewolves, wild sex, and deadly fire. The witch wants her dead, she can barely think past her mouthwatering rescuer, and in no time she realizes this adventure could be more than a fantastical memory…. If she’s brave enough.

In hindsight, Joella supposed she should have been a little more specific with her silent prayers. She’d blindly torn through the prickly, disorienting brush, turning at the sound of a sharp, pain-filled yelp, until all of a sudden the pup was within sight. Up against a rock three times his size and holding an injured front paw off the ground. Spots of blood dotted the dirt around her, but she barely noticed them when she realized why he was cowering.

Standing between them was the man she’d last seen in that darkened alley. The witch who’d killed Luka’s friend, the very same witch who now, supposedly, was after her.

“Char,” she breathed, her stomach dropping to her feet. What the hell was she supposed to do now? What chance did she stand against a real life witch?

The boy whimpered again and Joella swallowed heavily. Poor odds or not, if she did nothing the boy would be killed.

“Ah,” Char began with a chilling smile as he slid his dark stare to her. “So you know my name now.”

Dark brow lifting with exaggerated curiosity, the witch asked, “Which ‘him’ are we talking about, exactly?” He gestured toward the pup and added, “This one? Or the bigger, angrier one who rescued you last night?”

Both. But the ‘bigger, angrier one’ wasn’t her priority right then. “The boy. Leave the boy alone. Let me take him home.”

Char grinned this time. “Pick one,” he replied. “But choose carefully.”

Thrown, Joella hesitated. He was clearly playing some kind of game, but what was it? What was the catch here?

“You look confused,” Char continued. “I can either leave this one alone,” he said, “or I can let you take him home. Not both.”

“That doesn’t make sense,” she said, her mind still racing to figure out his point before she fell for it.

Char only shrugged and tucked his hands into his pockets.

Infuriated, Joella drew a breath and strode purposefully to the pup. She lifted him as gently as she could considering that he was already probably half-grown. He helped by curling his paws over her shoulder and holding still, for which she was grateful. She didn’t really have the upper-arm strength for this kind of stunt.

“Actually,” Joella said, glaring at him, “I choose option C. You go straight to hell.”

Char laughed, the sound echoing around them, and shook his head. “How about I bring hell to you? Volvenda ignis.”

Joella paused, just a couple of feet ahead of him. What did he just—? But the answer was already apparent, as bright orange flame shot up from the ground directly in front of her. She stumbled back instinctively, eyes widening as the flame raced out and around, forming a circle around them. Trapping her and the boy inside, inside with Char. The boy whimpered, attempting to nuzzle closer to her, and she couldn’t help but think that she understood. She didn’t want to be there, either.

“What’s it feel like to be a dead girl?” Char asked tauntingly.

Turning to face him for lack of anything better to do, Joella snapped, “I’m not dead yet.”

Char shrugged again. “That’s a technicality. But I can let you breathe a little longer … if you’ll tell me where the wolf den is.”

“No way.” She wasn’t about to sell out Luka’s people, even if some of them would probably not have returned the favor.

Sighing as if greatly inconvenienced, Char lifted his hands out at his sides. “Suit yourself.” The flame surrounding them flared, growing taller as the heat spiked, and for an instant Joella was sure she and the boy-pup in her arms were about to die. And in the next instant she registered the dark brown shape that seemed to have flown through the rising flame, front paws extended and fangs bared with violent intent.

Unfortunately, Char noticed him, too. His eyes immediately widened and he spun, a curse falling from his lips simultaneously.

The wolf—Luka, she was certain, despite that she’d never seen his wolf form—was primed to sink his fangs into Char’s collar, just shy of his throat, when Char’s body burst into ash and embers. The fire immediately snuffed out, thick, dark plumes of smoke rising up to the sky before dissipating on the wind. Luka crash-landed on the ground, skidding to a halt mere inches from Joella’s feet. He shook his head, coughing up ash, before finally looking up at her.

And she was right, it was definitely Luka. She recognized his deep, powerful, captivating eyes. They lost nothing of their allure in his canine form. But more than that, it seemed the scar she’d seen in the cave haunted this form, too. It was stretched, but still curved around his jaw and under his eye. Instead of looking like a scar on flesh, though, it was a flowing trail of furless skin, a trail, she realized, that wound down his throat and right front leg. It even appeared to dip onto his chest, but she couldn’t quite tell.

“Luka,” she said finally, taking a half-step backwards and dropping to her knees. The pup in her arms adjusted enough to look over and whimpered. This time it sounded more shameful than fearful.

Luka huffed, shook himself, and turned completely around. He took half a dozen steps before his body rippled, the fur receding as he began to shift. Joella could only watch, transfixed, as dark fur sank into quickly pinkening flesh. The thick tail swished and shortened rapidly until it was gone and Luka’s back arched, front paws coming off the ground. With a final roll of his shoulders he straightened, standing firmly on two human legs. Completely bare.

Joella’s cheeks flushed as she found herself staring unabashedly at his naked ass. His tight, perfectly rounded, naked ass. Which was beneath his strong, taut back. She’d never realized it before, but apparently she found strong shoulders incredibly attractive. And when she was finally able to pull her eyes away from those two distracting aspects of her new view, she realized even his damned legs were sexy. Seriously, weren’t men supposed to be the ones with leg fetishes?

Rose Wulf is a giant romance fangirl. Hot, protective, sometimes even downright barbaric heroes and spitfire heroines are her favorites. Rose has been writing for as long as she can remember, and over the years she’s only grown fonder of it. The bonds between characters have always captivated her, and as an author those are Rose’s favorite things to play with – not always to the relief of her fictional babies!

Behind the scenes Rose is a quiet personality. She enjoys spending her non-writing time with her four year-old German Shepherd, Shadow, her mom, and her friends. Be it a fun game of Cards Against Humanity or a relaxing movie night, Rose believes everything is better with company. As for her own romance, she’s still searching for her hero (and hoping that, when she does find him, he’ll be willing to cook!).

Where you can find Rose: