This week’s tease — and NEW RELEASE — comes from Illusions.

Brady has just had one of his visions, events yet to come and it gripped him while he was on the phone with Isabella Knowles who he has kept his relationship with her secret. But he’s falling harder and faster than he ever thought possible. Here, she’s run to his apartment after the line went dead while his vision took over.

(c) Kacey Hammell, 2016
All he could hear was pounding. And it felt like someone had taken a battering ram to his head. Brady opened his eyes, only to see the white, cracked ceiling of his bedroom. Disoriented, he sat up, prayed the hammering in his head would stop. Only then did he realize the noise in his head were not the only insistent thumps he could hear.

Someone was at his front door. He paused with his hands on his knees and allowed himself a moment to focus and stop the room from spinning.

Normally he would sit and let the memory of his vision come to him, but for the first time in a while, he didn’t need time to remember this one. What he’d seen was just as clear as his feet in front of him. Only in this instance, a fear like none other devoured him. His heart pounded as though it would beat right out of him, as well as break, if it were to come true. 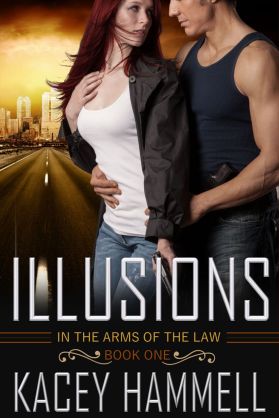 His head jerked up at Isabella’s voice beside him. He saw the only person in his life who truly mattered to him. It scared him, but he needed to touch her. Now. The sooner, the better. He pulled her close, his arms around her waist, buried his face in her belly, and inhaled the scent that was solely hers. He craved it twenty-four hours a day, seven days a week, three hundred sixty-five days a year. It was all her. His woman. The one he loved more than life itself.

He heard the worry in her voice, and squeezed his arms around her tighter. If he could pull her into his body, he would so she would remain safe forever and they’d never be apart.

“Christ, Brady, you’re killing me. Talk to me.” She tried to move away from him, but he couldn’t bear to let her go. “God damn it. Let go. You’re squeezing too tight.”

She was probably right and he loosened his grip on her. He tugged her down to his lap.

She squirmed, tried to rise and get away from him, but he held her tight. “You are being ridiculous. What happened?”

“How did you get in, babe?” He looked into her baby-blue eyes, saw varied emotions running rampant. Concern, confusion, even anger, but the concern warmed his heart.

“You were just gone. I heard you groan my name and then nothing. I thought I better come over and check on you. Just to be sure you were okay.”

Her nonchalant tone almost made him smiled. Underneath it all, he heard the worry and wouldn’t let her get away with it.

“But the door was locked, Bella. How did you get in?”

A blush stole over her face, and he couldn’t contain his grin. He didn’t want her to question him too much about his vision. She accepted his visions better than anyone else and understood what his painful groan would mean. Until he sorted through it, he wasn’t sure he wanted to share it with her. He would have to warn her, tell her some of what he’d seen so she would be prepared.

“I owe you a new door, actually.” As she blushed, he watched her stumble over what she’d done. “I kept pounding but got no answer, so I kicked it in.”

“You broke my door by kicking it in?” He wanted to laugh. And she said she didn’t care for him at all.

Detective Isabella Knowles, a tough-as-nails cop, lives by the law, and knows what she wants out of life. And it doesn’t include marriage or all that comes with it. Everything Isabella has ever known seems like an illusion when a new relationship makes her feel more alive than ever before.  She isn’t happy about it and fights it every step of the way.

Burned by his fiancée years ago, seer and P.I., Brady Jacobs never wants another commitment in his life.  But his bachelorhood and heart are threatened when he has one of his visions and see a killer striking too close to the woman he has recently come to love.

Danger lurks close to home and neither Brady nor Isabella like that they can’t control every situation…especially matters of the heart.

5 thoughts on “#MidWeekTease: “You broke my door…?” ~ Illusions #IntheArmsoftheLaw #MWTease”