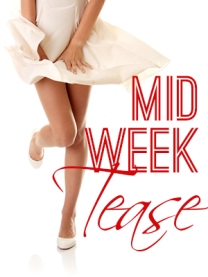 For years Jay has wanted his BFFs mother, Leanne, for his very own. After the wedding of his bff, Jay and Leanne vacation for a few days and Jay takes the opportunity to show Leanne how he feels about her. But for Leanne, their age difference and the recent betrayal of her ex-husband are obstacles she isn’t sure she can work through.

“You gonna sit there all day and gawk at my mother?”

Jay swallowed hard at his best friend’s words. One night a long, crazy one after his first big international photo shoot, in a drunken stupor, he’d confessed his deepest and darkest secret. His crush-slash-obsession for Beau’s mother.

But, Beau hadn’t been all that surprised by his confession, and it had thrown Jay for a loop. He’d been shocked Beau had said nothing to him about it before that moment. And to get caught by his buddy while salivating over the stunning image of Leanne in wedding photos was a tad embarrassing. Gorgeous in a light skin toned, knee-length dress, low cut enough for a nice amount of cleavage, he’d done his best all afternoon to keep his eyes off her.  It hadn’t been easy, but he’d given himself a dozen pep talks and solved dozens of math equations in his head to keep his body in check.

“You need to figure out your feelings for her, man. This obsession you have, not in a creepy way I know, but… Hell, you’ve become a monk, buddy.”

Jay sat back against the sofa cushions and glanced at Beau. His friend was right. Jay sighed as he leaned his head back.

The church room they’d used to get ready for Beau’s wedding now seemed too confining, smaller than he realized. The pine walls and rich mahogany decor were intrusive – too dark and foreboding. He suddenly wanted to be anywhere else.

But Beau’s comments were correct. The last couple years had flown by. And he’d buried himself in work to forget the woman who plagued his thoughts every day.

“Isn’t much hope, Beau. She’ll never look twice at me. Not as anything other than her son’s best friend.”

“If you spend time with her, things might change. Don’t ask me why, I don’t know. You have to find out?” Beau handed Jay a can of soda then sat across from him. “Not that I’m eager for my mother to get involved with anyone. She’s had enough pain. But at least with you, I know she’d be well taken care of and you won’t hurt her.” His gaze locked on Jay’s. “At least not on purpose.”

“I appreciate your faith in me, man. I’d never do anything to hurt her, but she has the power to break my heart.” Warmth coated Jay’s cheeks. He never liked talking about his feelings much – at least not when he was sober – but who else could he trust if not Beau?

“Mom would make mincemeat of you, sure. And it’s one reason I’m not concerned over you hurting her. I trust you. But you aren’t trying now, only becoming a workaholic.” He pulled off his tie and stuffed it in the pocket of his jacket. “Isn’t there a saying about no risk, no reward?”