Also available in print, links below

No one knows sacrifice better than former Army Sergeant Gavin Bennett. He’s witnessed firsthand the emotional, physical and mental toll of being caught in the crossfire. Being a bouncer-slash-bodyguard may not be Gavin’s dream job, but he’s willing to do just about anything to help out family. When Gavin reports for his first day of work, he quickly discovers a woman who threatens to crack his legendary cool.

Shree Walker is on the run from a dark past she tried to shut away. Battered and broken, a

happily ever after doesn’t exist for her. Ready to start fresh with a new life in a new city, she is happy dancing at the Vixen Club. She’d be even happier without the presence of the prickly new bouncer who won’t let anyone or anything get past his carefully guarded defenses. He’s a distraction she doesn’t need. And a temptation she can’t resist.

When Shree is kidnapped by the criminal mastermind hell-bent on taking the club at any cost, Gavin has to make a decision. Hold tight and continue to keep Shree at arm’s length. Or break down his walls and take a chance on something more powerful than them both: Love. 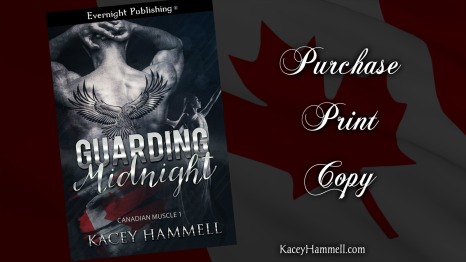 But not by much.

He blamed his blown-out knee and subsequent limp for his indecisiveness.

Retired Army. Two words he never considered alongside his name. At least not until he was in his sixties. Thirty-seven years old and forced to take early retirement after invading a terrorist cell in Afghanistan, uncertain if it was a trap. But seeing three young boys inside that building…he had no choice. Bomb or no bomb, he rushed into the falling down structure and had the last boy in his arms when the bomb went off.

Two months later, he awoke from his coma. He’d learned that all three boys had survived, though with some cuts and bruises, and had found peace with the fact that he’d done his job right. But he’d lost ten percent hearing in both ears, a crushed knee, and shrapnel still in parts of his right leg that were too embedded in bone and tissue to remove. The doctors had done everything they could without amputating.

Gavin had Sean to thank for that.

Friends since college, through combat training, and on every mission of their careers, he and Sean had endured a lot together. When doctors said it would be best to amputate his leg, Sean had opposed the decision and convinced the surgeon that Gavin would rather die than be without a limb.

How true that statement was. He owed Sean a lot. Which was why he stood within the shadows of the Vixen Club. To repay a debt he owed.

Enjoying the music, his fingers beat against his thigh. He scanned the room.

The place was bigger than expected. A stage took up a full wall at the front. Red, heavy curtains hung in the middle of the room, and from what he could see through an open spot between the drapes, there were mirrors behind them. A dark crack between the glass surprised him.

Huh, a doorway behind the glass? Must be how the dancers come and go.

Tables and chairs spread out from wall to wall. Jesus, there had to be eighty-some tables. How many people came to see women dance on stage, lip-sync, tease, and pout their way into tips?

Gavin strode to the bar at the top end of the room. Favoring his leg, he eased onto a stool and faced the stage. Two fairly tall, slender women stretched out their calves and backs. Leotards barely covered their ass-cheeks.

A man could get used to seeing such fine flesh every day.

Lucky for him, he’d been roped into being here. He’d make the most of the rash decision by appreciating the view.

The music picked up tempo, filling the area with rapid rhythms and a lot of bass.

Rock beats from a single on the last Nickelback album shook the floor. He couldn’t keep from tapping against the bar. His Army regimen played the band’s albums continuously. Hell, they were all Canadian and had to support home-country talent.

A blur of red and black rushing out on stage caught his attention. A woman skulked along at the front of the stage, bending, twirling, and angling her hot, sexy bod. She would no doubt capture every man’s attention when she performed.

Gavin swallowed hard, his eyes peeled to the sexy display in front of him.

Red sports bra and tight spandex shorts barely contained her curvy, tanned body dancing at lightning speed around the stage. Long, toned legs stretched, and her body twirled the pole as if it was made for her. Though she wore barely-there spandex, she didn’t give off a stripper vibe. Her thighs clung to the metal, showing off strong muscles. Without moving her legs from the pole, she let go with her hands and planted them firmly on the floor. She moved like a worm as she stayed suspended, the pole between her legs as her arms held her up. Her tight, large breasts were so tempting. His mouth watered.

The woman was skilled and in-tune with her body and with what she had to offer.

And boy, if she didn’t have a lot to offer.

Her breasts were definitely more than a handful, which was just how he liked them. Small, medium, large, and bountiful…as long as he could stick his dick in between the mounds and fuck them till his load burst all over a woman’s chin, lips, chest, neck, and in her hair. He loved to see his pleasure all over a woman.

His mouth watered because of the seductive goddess on stage.

Her long, dark, wavy hair clung to her face and shoulders, spinning around as much as she did. Bends, kicks, gymnast moves…he was impressed.

With a flick of her hair, she turned and glanced back over her shoulder, her hips swaying to the distinct bass. Facing the empty seats, she covered the stage, her movements skilled and quick. He watched, transfixed at the many steps, and could only guess at the training this woman needed to have in order to make it look so easy.

As the song ended, she bent at the waist, breathing deep. Her gaze caught on his.

This site uses Akismet to reduce spam. Learn how your comment data is processed.